This presentation is part of the MARJCC’s complimentary Meet the Author Jewish Book Series presented in partnership with Chabad Chayil, Mishkan Miami of the Greater Miami Jewish Federation, and Temple Sinai of North Dade.

The central character in The Corset Maker is inspired by the author’s mother’s life, Dora Libeskind, and portrayed through the eyes of Rifka Berg, a young Orthodox Jewish girl who rebels against her family. With its beginning in 1930 Warsaw, the story, spanning several decades, takes Rifka from her native Poland to countries that include France, Palestine, and Spain—in a journey of self-discovery and survival.

Prior to The Corset Maker, Berkovits, a scientist, educator, and conservationist, has published two memoirs–In the Unlikeliest of Places: How Nachman Libeskind Survived the Nazis, Gulags and Soviet Communism and Confessions of An Accidental Zoo Curator, and has penned a poetry book, Erythra Thalassa: Brain Disputed.

Light refreshments will be served at the program, and at its conclusion, books will be available for purchase and signing by the author. 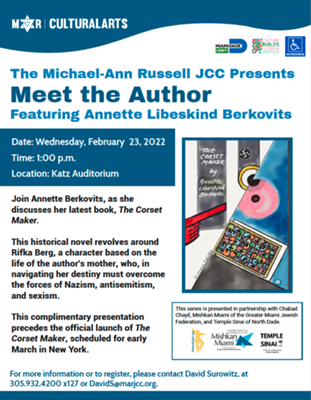 Summer 2022 was a season of awards and recognition for three Federation agencies that receive regular allocations from the Annual Greater Miami Jewish Federation/UJA Campaign. Repair the World – Miami (RTW), a movement committed to social justice through community service and learning, managed by Federation’s Jewish Volunteer Center (JVC), will kick off a new year of activities with a Meet the Fellows Shabbat dinner this evening at 7 p.m., at Naomi’s Garden in Miami.

The Israeli nonprofit Reboot Start-Up Nation is partnering with The Jewish Federations of North America (JFNA) to help immigrants and refugees displaced by the war in Ukraine to secure hi-tech jobs in Israel.