Now that American Jews have so clearly assimilated into American society what is the need for a Jewish press? What audience do the editors of Jewish publications target and how do they serve the American Jewish community as it grows diverse and diffuse? A panel of editors of major American Jewish publications including Alana Newhouse (Tablet) Jodi Rudoren (The Forward) and Philissa Cramer (JTA) discuss the role and significance of Jewish press today in a program of YIVO, moderated by Gal Beckerman. Tuesday - 8:00pm & 2:00am Thursday - 2:00pm Friday - 5:00am Saturday - 8:00pm & 1:00am

All-star NBA player Enes Kanter joins Ellie Cohanim to discuss his Turkish roots, opposing the country’s dictator Tayyip Erdogan and using his platform to build bridges, and what the future holds for him after basketball. A program of JNS. Thursday - 7:30pm & 3:30am Friday - 10:00am

Journalist and author Naomi Schaefer Riley joins JNS editor-in-chief Jonathan Tobin to discuss cancel culture and the damage that critical race theory is doing to children, as well as the role that intermarriage is having on the Jewish community. A program of JNS. Thursday - 8:00pm & 2:00am Friday - 9:00am

In The News: Abraham Accords Anniversary

Arsen Ostrovsky, CEO of The International Legal Forum (ILF) and Sharaka Board Member, discusses the one-year anniversary of the Abraham Accords, and the impact they've had inside Israel and around the region. With Shahar Azani. Monday - 6:30pm & 11:30pm Tuesday - 3:30am, 8:30am & 12:30pm

Author Francine Klagsbrun discusses her biography Lioness: Golda Meir and the Nation of Israel, which addresses the ways American Jews and Israelis view Israel’s only woman prime minister who served during the Yom Kippur War of 1973. Sunday - 12 Noon

A hero of the 1973 Yom Kippur War and the Battle of Tel Saki, Dan Almagor shares a remarkable story of survival and explains how he was finally able to talk about the horrific experience in which he lost beloved friends.
Sunday - 6:00pm

Marty Appel, a Jewish boy from Brooklyn who grew up to fulfill a childhood dream of working for The New York Yankees, talks about his years in baseball, Jews who've played the game, and his book that chronicles Yankee history, Pinstripe Empire. Monday - 3:00pm

The President & CEO of Israel Bonds, Israel Maimon, discusses his experiences in the Golani Brigade, his role in the 2007 bombing of the Syrian nuclear reactor, his concerns regarding Iran & his critique of the Iran Nuclear Deal. Monday - 9:00pm & Midnight Tuesday - 3:00pm

Jackie Robinson’s widow Rachel Robinson discusses the challenges she and her husband had to face as he broke the Major League color barrier in 1947-- and recalls the Jews who helped them.
Wednesday - 9:00pm & Midnight Thursday - 3:00pm

Nancy Brinker, founder of the Susan G. Koman organization, describes her devotion to helping women with breast cancer in tribute to her sister who died of the disease at 36; and why there is now a 99% survivor rate. Thursday - 9:00pm & Midnight Friday - 3:00pm

Rabbi Mordechai Becher explores the way the Talmud deals with Korach's challenging Moses' authority in the original series "Dimensions of the Daf." Sunday - 9:00am Monday - 4:00am Tuesday - 9:00am & 4:30pm Wednesday - 7:00pm

Human sexuality in the Jewish tradition is reviewed in an ongoing study of the story of the Garden of Eden, including the rabbinic view of female sexuality, birth control, and the day most appropriate for sexual relations. Sunday - 10:00am Monday - 5:00am Wednesday - 9:00am & 5:00pm Friday - 1:00pm

Deborah Lipstadt (Author, Dorot Professor of Modern Jewish History and Holocaust Studies at Emory University, and Biden’s pick as Antisemitism Envoy) sits with Bari Weiss (journalist, author, former editor at The Wall Street Journal and New York Times) for a discussion about the rise of antisemitism today and how we must address it. A program of the 92Y in New York City. Sunday - 8:00pm & 2:00am Monday - 10:00pm Tuesday - 4:00am Wednesday - 10:30am Saturday - 1:00am

Sharsheret and Miami Cancer Institute present a special program webinar in honor of Breast Cancer Awareness Month. Join us for a conversation about the origins and treatments and medical advances for breast and ovarian cancer. http://www.sharsheret.org As violent antisemitic attacks reached a record high level throughout the US and abroad, this year’s Holocaust Education Week, beginning Sunday, November 7 through Friday November 12, offers critical learning tools for our community. The community-wide program, presented by the Holocaust Memorial Beach, a Committee of the Greater Miami Jewish Federation, opens with a virtual commemoration of Kristallnacht: “The Night of Broken Glass.”

Additional programming throughout the week includes a photography exhibit by Holocaust Survivor Laszlo Selly, a public film screening of The Zookeeper’s Wife and a moderated discussion with Survivor Allan Hall. All events will be virtual, unless otherwise noted, free of charge and open to the public. Advance registration is required. Program access information will be sent following registration confirmation.

Want to be more productive? Make life more meaningful? Get extra money . . . and a better Jewish education? All without leaving your home?

The Levi Yitzchok Senior Academy (“LYSA”) gives retired (or semi-retired) adults a unique opportunity to stimulate your mind, share thoughts, learn Torah and feel accomplished. You can even receive a monthly stipend if you write a once-a-week short essay. No travel necessary!

“This is an ideal program for those who are ambitious to advance their wisdom with Judaic courses that are both intellectual and inspirational. Everyone should have the opportunity to know their history and heritage,” says Rabbi Menachem Smith, the director of United Jewish Generations.

LYSA is now accepting applicants for its new semester. Choose between TWO daily classes: 10AM-11AM, with Talmud and Jewish inspiration; and 3PM-4PM, on a variety of Jewish topics. All classes are live on Zoom (accessible to everyone) – join from any device or regular telephone, even without internet access.

To apply, or for more information, check LYSA’s website at WWW.UnitedJewishGenerations.com/SeniorAcademy or call (954) 458-6000.

Join the Community Online for the Virtual Commemoration of Kristallnacht: The Night of Broken Glass One of the most tragic days in modern Jewish history, Kristallnacht will be commemorated on the 83rd anniversary of the event. Widely considered to be a major turning point in Hitler’s campaign to annihilate the Jewish people, Kristallnacht was marked by a series of coordinated attacks on Jews in Germany and parts of Austria on November 9-10, 1938.

Join the community online to remember the victims of this event and honor the Survivors on Sunday, November 7, 2021 at 6 PM.

CLICK HERE TO RSVP FOR A LIVESTREAM OF THE EVENT

Jewish students entering their sophomore or junior year of high school, residing in Miami-Dade County, and attending a public or private school are invited to apply. Join us for a sunshine filled morning, either in person or virtually. To RSVP, go to JewishMiami.org/wpsunshine

Eric Goldman speaks with Evgeny Ruman, director of the film “Golden Voices,” about two immigrants making aliyah to Israel in 1990 from the USSR and trying to find their place in Israeli society after taking jobs as Russian overdub artists. Monday - 7:30pm Wednesday - 1:30pm Thursday - 5:30am Friday - 1:30pm

Why There Is No Peace in the Middle East

JBS President Mark S. Golub presents the history of Israel, the reasons for its legitimacy, and the reasons why a two-state solution may never be possible. A program of Congregation Beth El in Fairfield, CT, recorded in 2019. Monday - 8:00pm & 1:00am Wednesday - 2:00pm Saturday - 4:00pm

Egyptian political commentator Nervana Mahmoud joins Ellie Cohanim to discuss the evolution towards tolerance and co-existence in her home country of Egypt and in other countries in the region, antisemitism, perceptions of Zionism and more. A program of JNS. Thursday - 7:30pm & 2:30am Friday - 10:00am

Elliott Abrams, Tikvah Fund head and veteran of the Reagan, Bush and Trump administrations, joins JNS Editor-in-Chief Jonathan Tobin to talk diplomacy, democracy and the future of American Jewry. A program of JNS Thursday - 8:00pm & 1:30am Friday - 9:00am

In The News: Leon Saltiel

Leon Saltiel, World Jewish Congress Representative at the UN Geneva, discusses the joint statement he delivered to the UNHRC on behalf of The World Jewish Congress and the Muslim World League, on protecting human rights for all. He also discusses Jewish-Muslim relations as well as efforts to counter antisemitism. With Teisha Bader. Thursday - 6:30pm & 11:30pm Friday - 3:30am, 8:30am & 12:30pm

The current American effort to "mend fences" and improve U.S.-Palestinian relations and thee troubling findings of a recent meeting amongst Israeli police officials that analyzed the conditions that made the Mount Meron stampede tragedy possible. Wednesday - 6:30pm & 11:30pm Thursday - 3:30am, 8:30am & 12:30pm

Aryeh Green (My Israel Trail: Finding Peace In The Promised Land), a policy advisor for Natan Sharansky and one who met with top Palestinians activists, analyzes the failure of American Jewish leaders to build support for Israel. Sunday - 12 Noon

Aryeh Green continues his discussion on the need for liberal Jews to be unwavering in their defense of Israel and dives into the story behind his book My Israel Trail: Finding Peace In The Promised Land. Sunday - 6:00pm

Founding Editor-in-Chief of the The Foreign Desk news site Lisa Daftari describes her family upbringing as an Iranian-American Jew and discusses her work as a Middle East expert, investigative journalist and political commentator. Monday - 3:00pm

Ehud Diskin, born in Jerusalem in 1944 and serving in the Six-Day War and in Israeli intelligence, explains why he wrote his best-selling novel A Lone Wolf In Jerusalem, telling the story of Israel’s pre-state struggle against the Arabs and the British. Monday - 9:00pm & Midnight Tuesday - 3:00pm

Career diplomat and advisor on Israeli foreign policy, Amb. (Ret.) Yoram Ettinger (“The Ettinger Report”), discusses the mistakes made by the American Administration and by American Jewry regarding the Israeli-Palestinian conflict. Tuesday - 9:00pm & 12 Midnight Wednesday - 3:00pm

On October 25, 1973, the Yom Kippur War ended in a cease fire. Dan Almagor describes the heroic defense of the IDF on the Golan Heights at the start of the war which prevented the Syrian Army from overrunning the north of Israel.
Thursday - 9:00pm & Midnight Friday - 3:00pm

As the Torah parashah of "Korach" is read in synagogues throughout the world this week, Gateways' Rabbi Mordechai Becher explores the way the Talmud deals with Korach's challenging Moses' authority in the original series "Dimensions of the Daf." Sunday - 9:00am Monday - 4:00am & 1:00pm Tuesday - 9:00am & 4:30pm Wednesday - 7:00pm

Human sexuality in the Jewish tradition is reviewed in an ongoing study of the story of the Garden of Eden, including the rabbinic view of female sexuality, birth control, and the day most appropriate for sexual relations. Taught by Rabbi Mark S. Golub. Sunday - 10:00am Monday - 5:00am Wednesday - 9:00am & 4:30pm Friday - 1:00pm

In the midst of finding a balance between human needs and spiritual obligations, the discovery of a forbidden relationship between troubled teenage daughter Shaindele and a local boy precipitates life-changing consequences. How one simple test empowered these women with the knowledge they needed to make life-saving decisions about BRCA mutations and cancer for themselves and for their families.

Ali Rogin, PBS NewsHour Producer and author of “Beat Breast Cancer Like a Boss”, Rabbi Laila Haas, Director of Adult Learning and Growth at CAJE and Yodeah Board Member, Dr. Liz Etkin-Kramer, Yodeah Founder and Gynecologist, will share their journey and the choices they made to ensure a long, healthy life for themselves and to avoid passing the BRCA mutation on to their children. One in 40 Ashkenazi Jewish men and women carry a BRCA mutation which can lead to a higher risk of breast, ovarian, melanoma and prostate cancer. There is also a 50% chance of passing this mutation on to the next generation and most don’t know. If you know you carry this mutation, there are pro-active measures you can take to mitigate these risks and significantly reduce your chance of developing cancer. 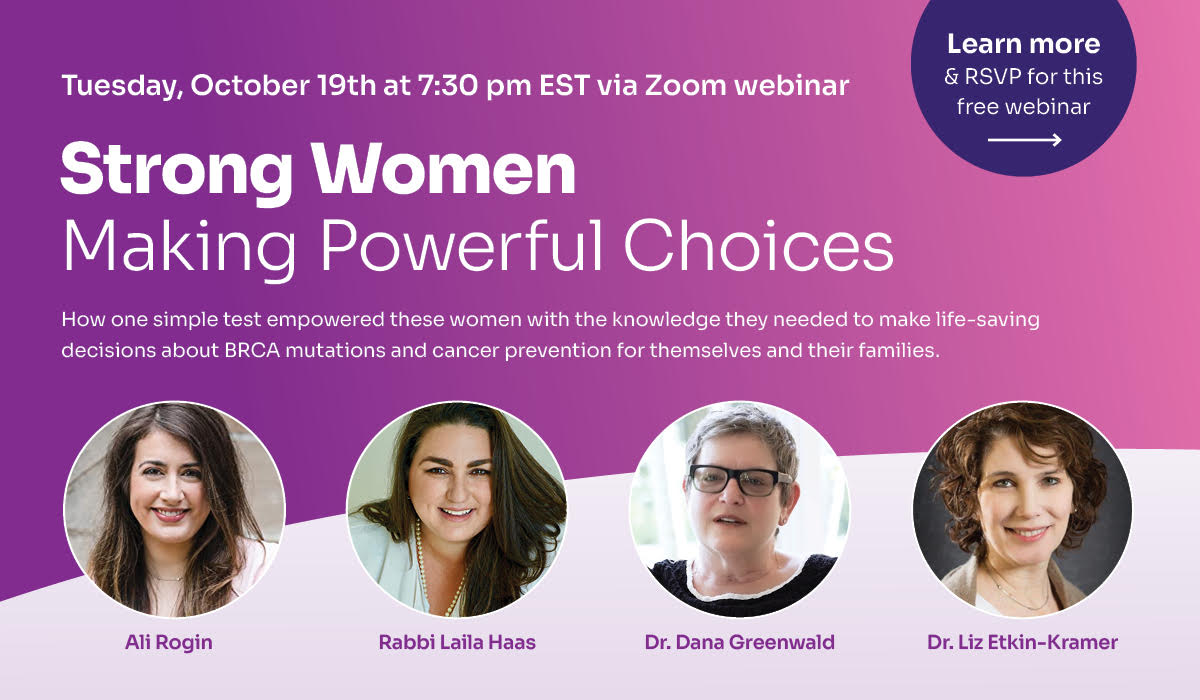