The World Jewish Congress convenes two panels of Jewish female spiritual leaders from across the religious spectrum to explore notions of unity and diversity, and acknowledge specific challenges and opportunities presented in their respective Jewish communities and more. Monday - 7:30pm & 1:00am; Wednesday - 1:30pm; Saturday - 7:00pm; Sunday - 1:30am

Kicking Antisemitism Out of the UK

In The News: Israel and Yalde Teman

JBS journalist Micah Halpern discusses the unusual lull happening at the moment of coverage of Israel’s fourth election in the American news media and an analysis of Maimonides' "rules for Jewish war". Wednesday - 6:30pm & 11:30pm; Thursday - 3:30am, 8:30am & 12:30pm

Leah Goldin, mother of IDF Lt. Hadar Goldin (z”l) who was murdered by Hamas in 2014, describes her more than five years of efforts to move the world community to demand Hamas comply with international norms and return her son’s body. Sunday - 12 Noon & 6:00pm

Chairman of the Chelsea Football Club in the UK, Bruce Buck, discusses the Club's initiative "Say No To Antisemitism," and its mission to use the power of sports to help educate fans about the evils of discrimination & antisemitism.
Tuesday - 9:00pm & 2:00am; Wednesday - 3:00pm

Rabbi Raphael Shore discusses his film-based organizations, “Jerusalem U” and “The Clarion Project,” and the work he is doing to educate Jews and to expose the dangers of Islamic extremism. Thursday - 9:00pm & 2:00am; Friday - 3:00pm

Herbert Block, Executive Director of The American Zionist Movement (AZM), discusses the various expressions of pro-Israel activism in the United States and reflects on why some American Jews do not appreciate the nobility of Zionism.
Saturday - 6:00pm

Talmud Study: How To Be A Kosher Spy

Rabbi Mordechai Becher (Senior Lecturer, Gateways) discusses the Talmudic concept of violating Kashrut and other aspects of Jewish Law for a greater good such as serving a secret agent in the Mossad. Sunday - 9:00 pm; Tuesday - 9:00am & 4:30pm; Thursday - 7:00pm; Friday - 4:00am

From The Aleph Bet: Lesson 10

What it means to be a "Jew" (according to the Jewish tradition), and Jewish sensitivity to the pain of one's enemies are explored through the Exodus story with rabbinic commentary of the midrash. Wednesday - 9am & 4:30pm; Friday - 1:00pm

The unprecedented nature and rapid spread of COVID-19 has exposed critical risks to our local economy as well as our systems of health care and education.

As we approach the 12-month mark of this prolonged crisis, our partners at the United Way of Miami-Dade are conducting a Pandemic Impact Survey to measure how Miami-Dade households have been affected by the pandemic including the financial burden on families in our community. The survey aims to collect responses from a wide range of households, income levels, as well as, small business owners.

Your confidential participation, which will take no more than 10-15 minutes, is critical to understanding COVID’s impact to date as well as help inform long-term recovery efforts. A preliminary report will be published this summer.

What Gives Me Hope: Insights with Rabbi Elizabeth Hersh of Temple Emanuel in St. Louis 03/25

Course Description: Join Rabbi Elizabeth Hersh of Temple Emanuel in St. Louis for "Hope: The Eternal Jewish Way of Life". Each moment of our life is a reminder of the positive way to approach life and living.

What Gives Me Hope: Insights with Rabbi Dr. Morey Schwartz of International Director of Melton 03/18

Course Description: Join Rabbi Dr. Morey Schwartz, International Director of Melton for "Hatikvah: Much More than a National Anthem for Me" in an exploration of Israeli Hope through this important song.

Dynamic Duos: An Interview with Maayan and Gil Hoffman 03/17

Course Description: Join Melton's Rabbi Rachel Bovitz and Rabbi Dr. Morey Schwartz in conversation with Harriett Rossetto and Rabbi Mark Borovitz. Harriett Rossetto founded Beit Tshuvah over 30 years ago as an act of tikkun olam in helping repair Jewish souls suffering from addiction. Harriett’s work is grounded in spiritual healing and provides a community that supports all addicts so they can thrive and create a brighter future starting with themselves. Rabbi Mark Borovitz is the founding rabbi at Beit Tshuvah and helps recovering addicts find their calling and way in the world. He works to support the residents and congregants and has made it his mission to de-stigmatize this disease through rehabilitation and reintegration founded on wisdom and Jewish principles.

Virtual Event for the Price Library of Judaica 03/07

Forty Years of the Isser and Rae Price Library of Judaica

George A. Smathers Libraries at the University of Florida Deborah E. Lipstadt is the author of many highly regarded books on the subject of the Holocaust and antisemitism, including her most recent work, Antisemitism Here and Now, which won the 2019 National Jewish Book Award. Her book History on Trial: My Day in Court with a Holocaust Denier (2006) recounted her experience of being sued for libel by David Irving, a UK Holocaust denier. Lipstadt’s victory in this seminal court case is regarded as having “done for the new century what the Nuremberg tribunals or the Eichmann trial did for earlier generations.” The book was made into the movie ‘Denial’ starring Rachel Weisz and Tom Wilkenson with screenplay by David Hare. It was nominated for a BAFTA award as one of the best British films of the year. Lipstadt was appointed to the United States Holocaust Memorial Council by Presidents Clinton and Obama, and she was asked by President George W. Bush to represent the White House at the 60th anniversary of the liberation of Auschwitz. 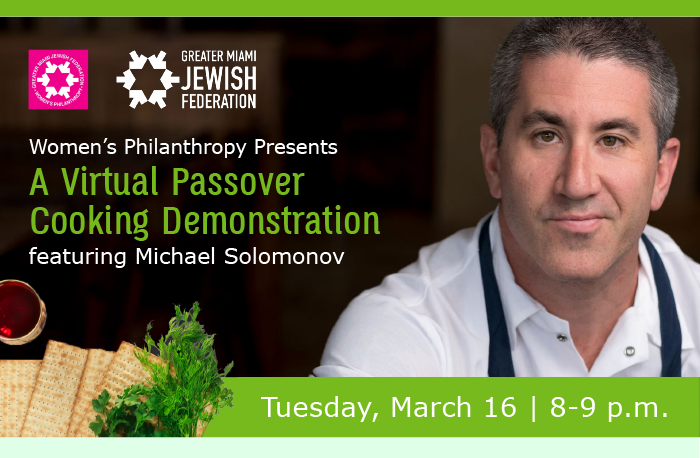 Shop for the ingredients ahead of time to cook along with Chef Solomonov or save the recipes for later use.

Grandparents with LGBTQ+ grandchildren from traditional communities gather and learn how to understand and support an LGBTQ+ grandchild and their family. The purpose of this group is to meet and socialize with other grandparents, to gain support from one another, and to share experiences.

Where: Zoom. Login information is sent via email to those who have registered.

Meet Ros, a women's basketball star at Stanford University, a member of the Nigerian national team, and a current NBA broadcaster and media personality. We're very proud to also count Ros as an Israel Outdoors alumna. Join us for this special conversation where Ros will share her personal story, reflect on her Birthright journey, and explain her off-the-court passions for supporting mental health awareness and female empowerment.

Make a Difference on Super Sunday

Join Your Community For The Main Event