IDF Brigadier General Amir Ebstein, Commander of the IDF Northern Formation at the Lebanese border, discusses his initiative to include Israeli women as combat soldiers; the Hareidi draft; the Iranian threat; and terrorist warfare. With Benjamin Anthony. Tuesday - 7pm & 1am; Thursday - 1pm

Rabbi Raphael Shore discusses his film-based organizations, “Jerusalem U” and “The Clarion Project,” and the work he is doing to educate Jews and to expose the dangers of Islamic extremism. L’Chayim with Mark S. Golub. Today (Sunday) - Noon & 6pm; Monday – 3pm

Itamar Marcus of "Palestinian Media Watch," which monitors what Palestinians say in Arabic on PA Television and the PA website, speaks to whether there is a "moderate" Palestinian leadership with which Israel can make peace.
Tuesday - 9pm & Midnight; Wednesday - 3pm

Criminal law attorney and US Constitutional scholar Jay Goldberg discusses his career as both prosecutor and defense attorney in some of the nation's most high-profile cases described in his autobiography The Courtroom is My Theater. With Mark S. Golub. Thursday - 9pm & Midnight; Friday - 2pm

Journalist Tuvia Tenenbom discusses his break from his ultra-Orthodox childhood in B'nei B'rak, and the upsetting realities he chronicles in his book "Catch The Jew!" - conversations which show how Palestinians and Israelis are worlds apart.
Saturday - 6pm

Meet Michelle Obama's first cousin (once removed), Rabbi Capers Funnye, who discusses his conversion to Judaism, his work in Africa, and what the black Jewish experience is like in America.
Sunday - 8am & 2am; Monday - 10pm & 4am; Wednesday - 10:30am; Friday - 8pm & 1am; Saturday - 3pm

In the News: World Zionist Elections

Herbert Block, Executive Director of the American Zionist Movement, describes how the World Zionist Congress elections are conducted and why they are important for world Jewry. With Shahar Azani.
Sunday – 5:30pm; Monday – 3:30am, 8:30am, 12:30pm

From the Aleph-Bet: Lesson 1 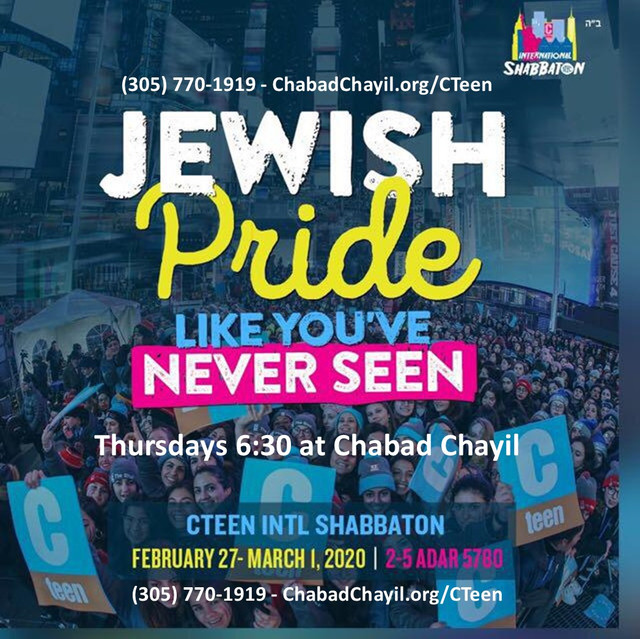 Jewish teens get together, for humanitarian projects helping others, to learn Torah, have a bite, socialize and have a great time! Next Big Trip: NYC Shabbaton (& optional Ski Trip) Feb 27-March 1.

Flamenco Sephardit will be performed on Sunday, January 26th at 7 PM.

Open to players of all levels, including beginners. Refreshments and light snacks provided.

$18 for Temple Emanu-El members $25 for Non-members BYOB must be Kosher alcohol Visit tesobe.org to RSVP 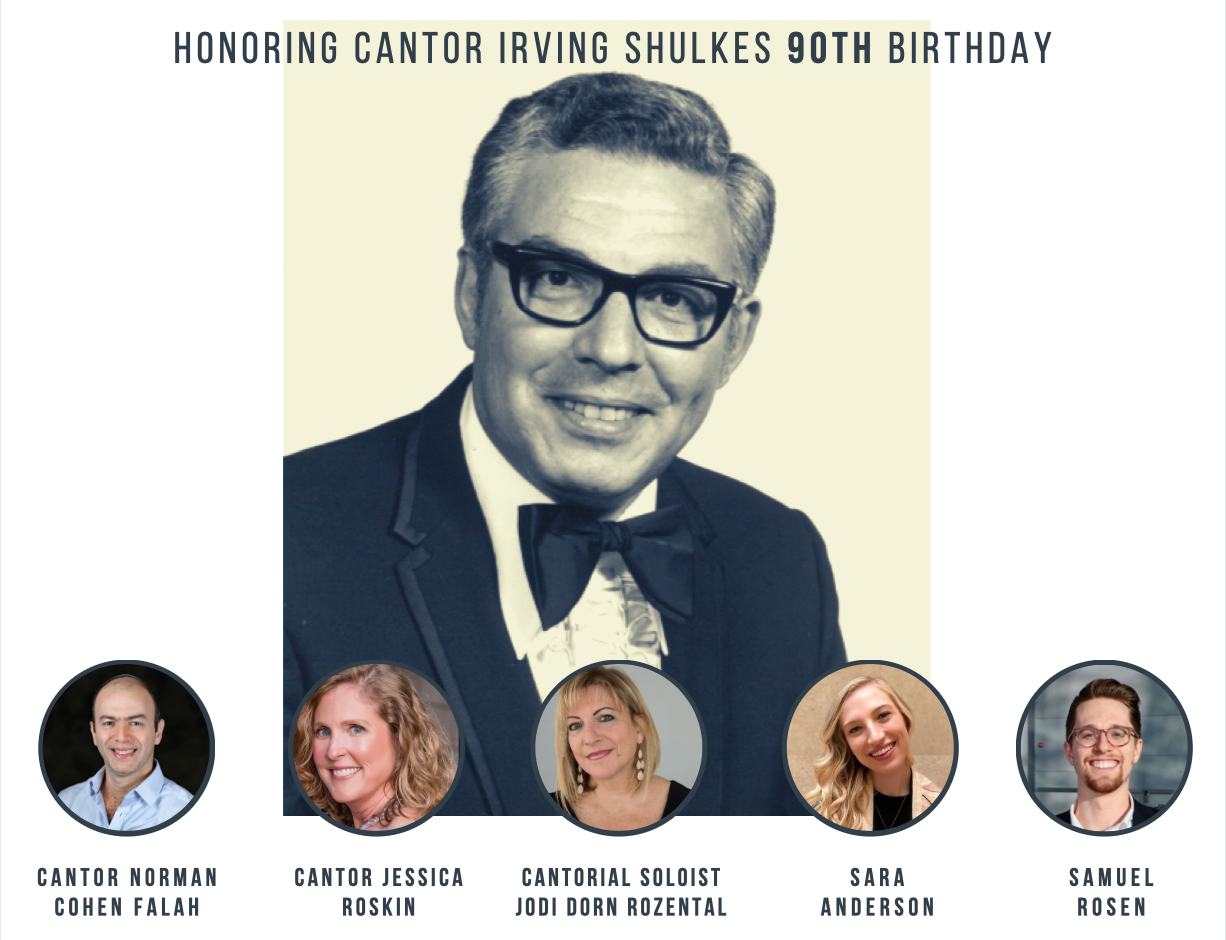 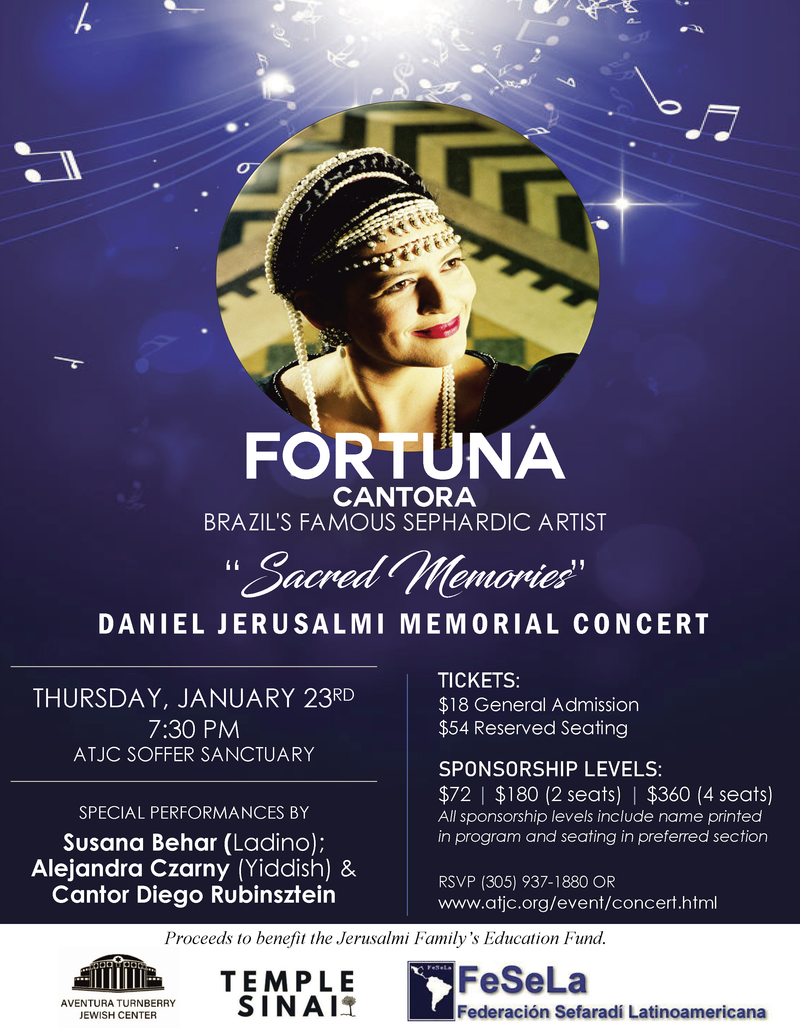 The Greater Miami Jewish Federation is joining our global Jewish community in response to the 6.4 magnitude earthquake that struck southwestern Puerto Rico on January 7 along with the ones that followed it in the consecutive days.

It is estimated that 2,000 people were displaced and are living in temporary shelters as a result of structural damage to their residences. While power has been restored to parts of the island, many areas remain without electricity. The government of Puerto Rico has identified the need for basic supplies such as water, food and medical supplies as well as tents and cots to assist with sheltering those displaced and water sanitation efforts.

One hundred percent of all contributions will be directed to assist victims of the disaster relief fund you designate.

Donation checks should be mailed and made payable to the Greater Miami Jewish Federation, 4200 Biscayne Boulevard, Miami, FL 33137. Please note in the memo "Puerto Rico Earthquake Relief". For assistance, you may also call 305.576.4000. Calling all teen leaders! Travel to Israel and get high school credit for it!

The Stephen Muss Impact Fellowship (http://www.amhsi.org/stephen-muss-impact-fellowship/) gives a select group of high school students the opportunity of a lifetime to spend a high school semester studying in Israel. Participants study abroad at Alexander Muss High School in Israel (AMHSI-JNF) and then return home as ambassadors for Israel and future Jewish change-makers. Made possible by Stephen Muss and Federation, the program is now accepting applications for Fall 2020, Miami’s 3rd cohort!

The application deadline has been extended to February 16, 2020.

*Full tuition covered minus $500 deposit. All Impact Fellows are also required to fulfill a $1000 fundraising goal.