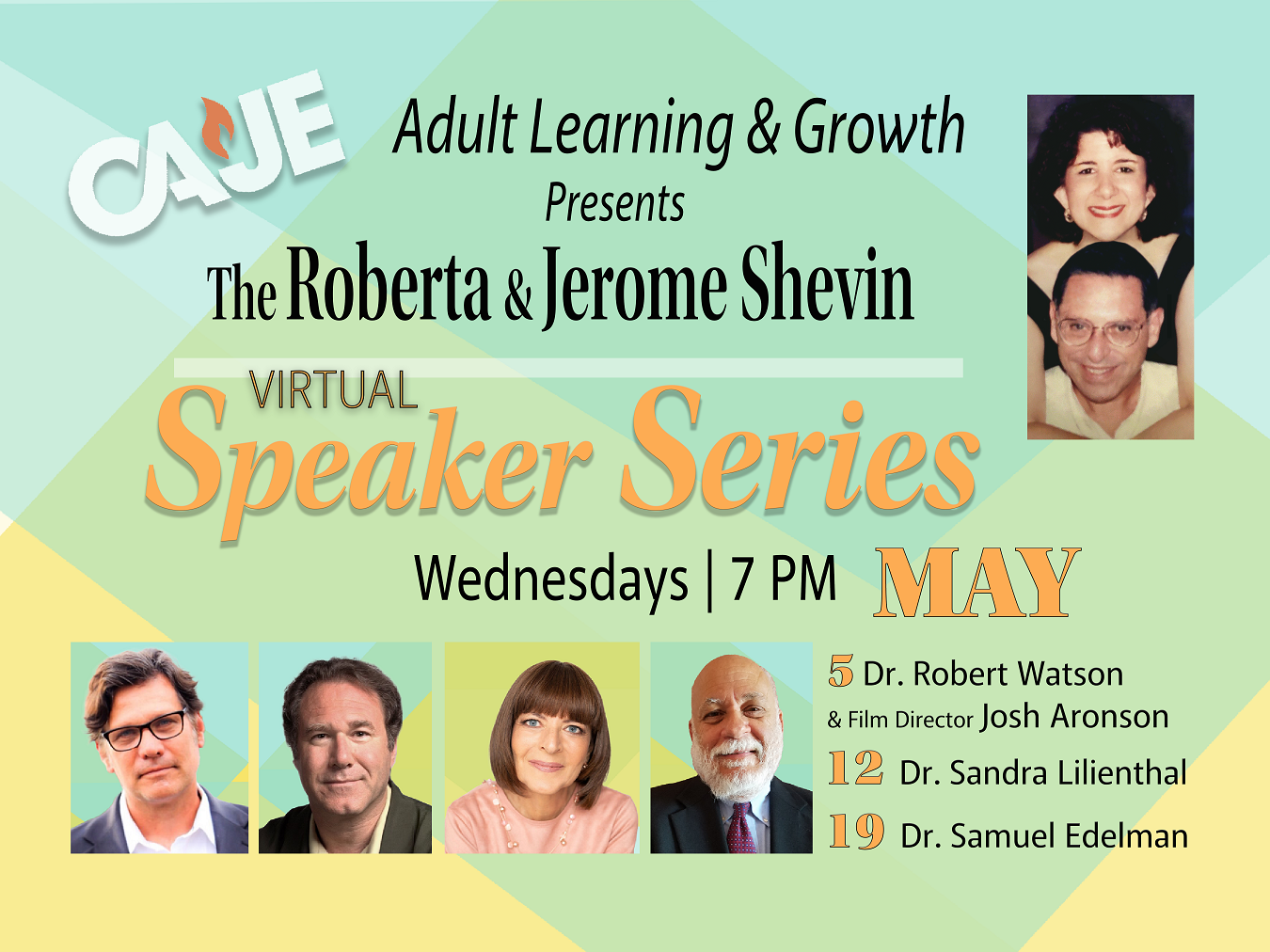 The Roberta and Jerome Shevin Speaker Series, lovingly established by their son Adam R. Shevin, represents the areas of education Roberta and Jerome committed their lives and work to: Holocaust Education, Jewish-Christian relations and Adult Jewish Learning. They believed deeply in the power of education as a unifying force and the topics of this series speak to that legacy.

Dr. Robert Watson and Award Winning Film Director Josh Aronson present: "Orchestra of Exiles". They will share the story of Bronislaw Huberman, the Polish violinist who founded the orchestra that became the Israel Philharmonic, as told through Aronson’s film “Orchestra of Exiles”. Before the Nazis came to power Huberman was focused only on building his own monumental career but witnessing Hitler’s agenda was a call to action that Huberman could not ignore. Together they will explore Huberman’s personal transformation and subsequent heroic struggle to get Jewish musicians out of Europe during World War II.

*Dr. Sandra Lilienthal presents: "Living Life in Radical Amazement - Inspired by the Teachings of Rabbi Abraham Joshua Heschel". Whether it is because we are too busy running around, or because we are staying indoors while there is a pandemic, most of us have very little time or energy to "stop and smell the flowers." Built on Rabbi Abraham Joshua Heschel's teachings, we will explore both the theological and practical implications of living a life in which we direct ourselves to experience amazement and awe in the world that surrounds us, the people we meet and in our deepest selves. “As civilization advances, the sense of wonder declines. Such decline is an alarming symptom of our state of mind. Mankind will not perish for want of information, but only for want of appreciation. The beginning of our happiness lies in the understanding that life without wonder is not worth living. What we lack is not a will to believe but a will to wonder. (Heschel).”

Dr. Samuel Edelman presents: "Jules Isaac: The French Jewish Historian Who Changed Christianity". Jules Isaac's name is unknown to most in the Jewish world. More than 73 years ago Isaac, a famous French Jewish historian, wrote a critically important book titled "Jesus and Israel" during the height of the Holocaust while in hiding. The impact of his writing began a Jewish Catholic dialogue which would inspire and change Christian Jewish relations and alter the Catholic Church's attitude toward Jews in a dramatic and substantial way. Dr. Edelman will share Isaac's personal story and explain the importance of his writings in helping Pope John the 23rd in bringing about the Church's change of attitude toward Jews and Judaism as expressed in Vatican II and the document "Nostra Aetate".

Price: free · Duration: 1 hr Public · Anyone on or off Facebook In celebration of Israel’s 73rd birthday, hear from Israeli leadership, sing with the IDF musical ensemble, and meet the Sabras and soldiers who help shape the modern Jewish State. A special edition of FIDF Live for Yom Ha’Atzmaut Monday - 7:00pm & 2:00am; Wednesday - 1:00pm; Thursday - 5:30am; Saturday - 7:00pm & 2:00am

Environmentalists address the global climate crisis and discuss a coherent and achievable path forward that Federations and Jewish organizations can use to tackle the challenges and opportunities the crisis presents. A program from the JFNA GA 2020. Tuesday - 7:30pm & 2:00am; Thursday - 1:30pm

In The News: Israel-UAE Budding Peace

Months after signing the Abraham Accords, what does Israel-UAE relations look like, and what is being done to promote peace between both countries? Ambassador Eitan Na'eh, Israel's first ever Head of Mission to the UAE, shares his experience. With Shahar Azani. Monday - 6:30pm, 11:30pm; Tuesday - 3:30am, 8:30am & 12:30pm; Saturday - 11:30pm

Thinking Out Loud: With Micha Halperin

"Thinking Out Loud" journalist and commentator, Micah Halpern, discusses the variations in COVID compliance inside synagogues as religious institutions start to reopen (both in Israel and the U.S.) and vaccinations become more widespread also, the shadowy "proxy war" that is happening between Israel and Iran, consisting of torpedo attacks on large ships Wednesday - 6:30pm & 11:30pm; Thursday - 3:30am, 8:30am & 12:30pm

For Israel's independence day, fifth generation Sabra Rochelle Etingin recounts her experience as a young girl growing up in Israel during the birth of the Jewish State of Israel. A conversation with Mark S. Golub for Yom Ha'atzmaut. Sunday - 12 Noon & 6:00pm; Monday – 3:00pm

Yigal Dilmoni, CEO of the Yesha Council of communities on the West Ridge (West Bank) of Israel, describes plans to expand settler communities and shares his perspective on the Israel-Palestinian conflict.
Monday - 9:00pm & 12 Midnight; Tuesday - 3:00pm

Rabbi Mordechai Becher discusses the Talmudic view of Capital Punishment and the strict restrictions on its application. Sunday - 9:30am;Tuesday - 9:30am & 5:00pm; Thursday - 7:30pm; Friday - 4:30am

From The Aleph Bet: Lesson 15

Is the Torah "poetry" according to the Jewish Tradition? And what is the "essence" of Torah? Wednesday - 9:00am; Friday - 1:00pm

Severe Autism: A Conversation For Caregivers via Zoom April 22

Join us on Thursday, April 22 at 7:30 p.m. for Severe Autism: A Conversation For Caregivers via Zoom

UPHEAVAL: The Journey of Menachem Begin

Imprisoned by the Soviets. Orphaned by the Holocaust. Elected Prime Minister. Crowned peacemaker by the Nobel Prize Committee. Disgraced by the Lebanon War. Menachem Begin was a pillar of the State of Israel and a tireless fighter for the Jewish people. He was, at the same time, a controversial leader.

His life is a nuanced and complicated canvas that tells the story of key events in the history of modern Israel and its relationship to its Middle East neighbors. With evocative imagery, rarely seen archival materials, and revealing interviews with those who knew him, UPHEAVAL portrays the life and essence of this brilliant, tough, complex, loving, and proud man who never compromised when the survival of Israel and the Jewish people were at stake. The Apple and the Shady Tree; The Mafia My Family and Me

A virtual event with author Lisa Novick Goldberg...The true story of how a Jewish New Yorker's familial relations to the Mafia profoundly shaped her life. 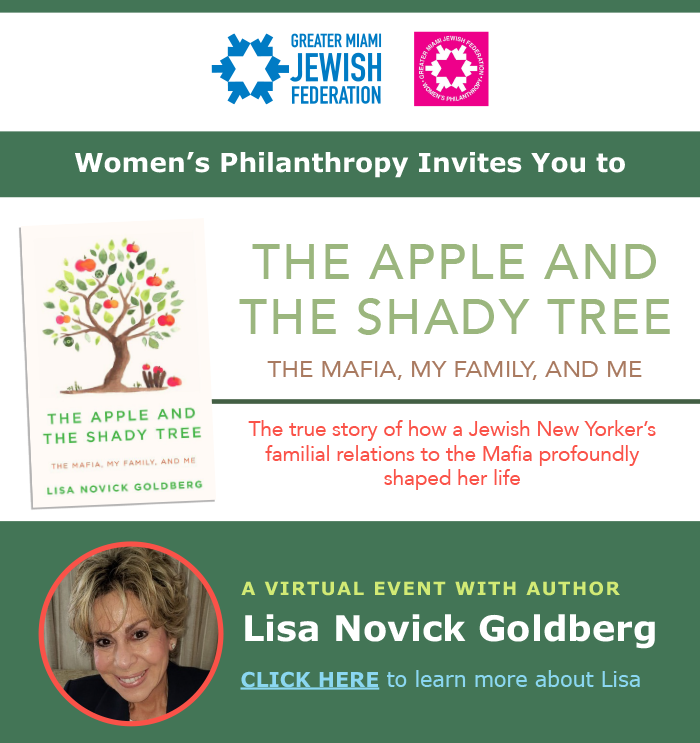 Medicine & Morality: The Choice is Ours

Explore how lessons of the Shoah — how the power and privilege of medicine can be abused in times of crisis — have informed the choices made by healthcare professionals during the pandemic, and the implications of these choices for us all. Monday - 7:30pm & 2:00am; Wednesday - 1:30pm; Thursday - 5:30am; Saturday - 8:00pm & 1:30am

Mark the transition from Yom HaZikaron, Israel's Memorial Day, to Yom Ha'Atzmaut, Israel's Independence Day with Central Synagogue’s Takes Ma’avar program with personal testimonies, words of inspiration and songs of remembrance and celebration. Wednesday - 7:30pm & 1:00am; Thursday - 10:00am; Friday - 10:00am

David Ben Gurion reads the entire "Declaration of Independence of the Modern State of Israel," Erev Shabbat, May 14, 1948 (5 Iyar 5708). With English text of the Declaration in captions. Plus videos celebrating Yom HaAtzmaut and the thoughts of Benjamin Anthony and Daniel Gordis. Wednesday - 8:45pm & 2:15am

In The News: A New Government?

Israel's President Rivlin gave Prime Minister Netanyahu the first chance to establish a government in Israel, following the results of the last elections. What are his chances of success and what might happen next? Israeli political analyst Kobi Cohen shares his insights. Monday - 6:30pm, 11:30pm; Tuesday - 3:30am, 8:30am & 12:30pm; Saturday - 11:30pm

The prospect of the U.S. engaging with Iran and possibly re-entering a form of the oft-derided "JCPOA" nuclear deal and why the rhetoric coming from Turkey regarding "reconciliation" with Israel is all talk, given all of the pro-terror and anti-Israel actions it has taken over the last decade. Wednesday - 6:30pm & 11:30pm; Thursday - 3:30am, 8:30am & 12:30pm

Ernie Michel z’l, who lived through Kristallnacht (The Night of Broken Glass) in Germany (Nov 9-10, 1938) and saw his synagogue burned to the ground, recalls this pogrom and his life during the Holocaust as told in his book, "Promises to Keep." Sunday - 12 Noon & 6:00pm Monday - 3pm

Jackie Robinson’s widow Rachel Robinson discusses the challenges she and her husband had to face as he broke the Major League color barrier in 1947-- - and recalls the Jews who helped them. Monday - 9:00pm & 12 Midnight; Tuesday - 3:00pm

World War II vet Murray Greenfield, who as a young man joined the effort to smuggle Survivors through the British Blockade of Palestine, tells his dramatic story and how he endured Cyprus to build a life and Gefen Publishing. Tuesday - 9:00pm & 2:00am; Wednesday - 3:00pm

For Israel's independence day, fifth generation Sabra Rochelle Etingin recounts her experience as a young girl growing up in Israel during the birth of the Jewish State of Israel. A conversation with Mark S. Golub for Yom Ha'atzmaut. Wednesday - 9:00pm & Midnight; Thursday - 3:00pm

Thursday: Abba Eban z"l For Yom Ha'atzmaut, Abba Eban z”l (1915-2002), best known for his years of service to Israel in the UN, recounts his involvement in the Zionist dream and the dramatic moments leading up to the creation of the modern Jewish State. Thursday - 9:00pm & Midnight; Friday - 3:00pm

From The Aleph Bet: Lesson 14

When something like the earthquake in Haiti occurs, does the Jewish Tradition hold God responsible in any way? Does human suffering challenge the existence of God? Wednesday – 9:00am & 4:30pm

Israeli President Shimon Peres z”l, former prime minister and Nobel Peace Prize winner, discusses his personal reflections and addresses concerns for Israel and world Jewry in a NYC visit on the publication of his biography. Taped at the 92nd Street Y. Sunday - 8:00pm & 2:00am; Monday - 10:30pm; Tuesday – 4:30am; Wednesday - 10:30am; Saturday - 1:00am & 4:00pm