* For a complete and timely schedule and other television providers, go to www.jbstv.org*

Liberal political commentator Peter Beinart (The Crisis of Zionism) critiques the Trump Administration’s Peace Plan and explains how he sees changing American Jewish attitudes toward the State of Israel. With Jodi Rudoren (Forward), a program of The Forward from Temple Ner Tamid in Bloomfield, NJ.
Tuesday - 8pm & 1:30am; Thursday - 2pm; Saturday - 7pm; Next Sunday – 4am

In Defense Of Israel: A People. A Destiny

Also On L’Chayim This Week

Rabbi Charles Sherman, author of "The Broken and The Whole," describes a story of extraordinary family transcendence as he describes how his son, Eyal, has survived serious brain stem damage Monday - 9pm & Midnight; Tuesday - 3pm

Retired British Colonel Richard Kemp discusses his military career which led him to an appreciation and admiration for the IDF, and explains why he feels compelled to be an outspoken supporter of the State of Israel and its army. Tuesday - 9pm & Midnight; Wednesday - 3pm

Rabbi Raphael Shore discusses his film-based organizations, “Jerusalem U” and “The Clarion Project,” and the work he is doing to educate Jews and to expose the dangers of Islamic extremism. Thursday - 9pm & Midnight; Friday - 3pm

Ina Garten, whose book "Barefoot Contessa: How Easy Is That?" features simple recipes and easy tips, talks with writer Anna Quindlen about her successful ventures in retail, television, and publishing. Today (Sunday) - 8pm & 2am; Monday - 10pm & 4am; Wednesday - 10:30am; Friday - 7:30pm & 1am; Saturday - 3pm

The powerful story of Simone Viel, who survived Auschwitz to become a champion of women’s rights in post-war France, serving as Minister of Health and helping to legalize abortion in the 1970’s. Starring Emmanuelle Devos, Directed by Christian Faure. Today (Sunday) - 9pm & Midnight; Friday - 9pm

From the Aleph-Bet: Lesson 19 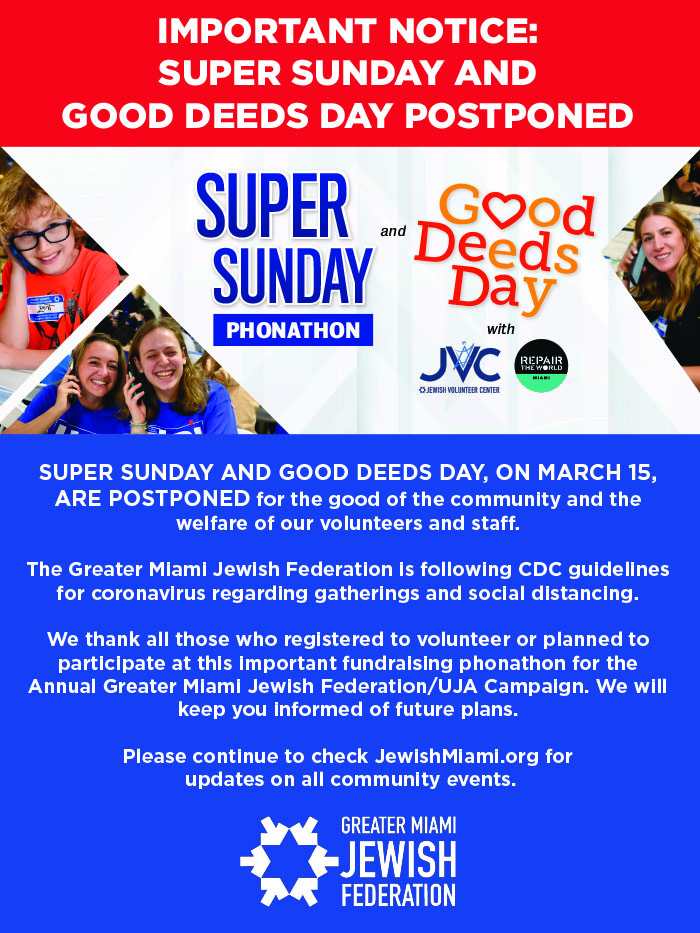 Attention, college and graduate students! Apply now to receive a grant from the Sylvia Tuman Scholarship Program, administered by The Foundation of the Greater Miami Jewish Federation.

The Sylvia Tuman Scholarship Program provides a limited number of scholarships for Jewish students who require financial assistance to further their education. Students must be enrolled or accepted into an accredited undergraduate or graduate degree program at a college or university located in Miami-Dade or Broward counties. Preference is given to institutions in Miami-Dade County.

An additional resource available for your consideration is an interest-free loan from the Hebrew Free Loan Association, a subsidiary of the Greater Miami Jewish Federation. For more information, please visit www.hebrewloan.org or call 305-692-7555.

"Israel’s Ambassador of Song” Ron Eliran performs some of his most well-known songs (Sharm el Sheikh) and Vanessa Hidary (Hebrew Mamita) recites her poem on Jewish identity; and Jake inducts Steve and Eydie (z”l) Gorme into the Catskills Hall of Fame. Tuesday - 9pm & 2am; Wednesday - 3pm

Jake welcomes star of stage, screen, TV and Yiddish theater, Mike Burstyn and great American comic, Shecky Greene who will also be Jake’s inductee into the Catskills Hall of Fame. Wednesday - 9pm & 2am

Jake welcomes comedian Sarge; star of stage, screen and television Tovah Feldshuh; and First Lady of the Catskills Resorts, Elaine Grossinger Etess, who is inducted into the Catskills Hall of Fame.
Thursday – 9pm & 2am

One of the Jewish communities leading philanthropists and co-founder of Birthright Israel, Charles Bronfman, discusses his life with Rabbi Peter Rubenstein, Director of Jewish Community and Bronfman Center for Jewish Life at the 92nd Street Y. Today (Sunday) – 8pm & 2am; Monday - 10pm & 4am; Wednesday - 10:30am; Friday - 8:30pm & 1am; Saturday - 3pm

Scot Shay, author of “In Good Faith – Questioning Religion and Atheism,” explains how his book encourages atheists to consider intelligent and powerful reasons to doubt their certainty and to be open to the reality of God. L’Chayim with Mark S. Golub.
Sunday – Noon & 6pm; Monday - 3pm

One of the Jewish community’s iconic feminists, Phyllis Chesler, Emerita Prof. of Women’s Studies, discusses her autobiography “A Politically Incorrect Feminist,” her personal rape, and the betrayal of the American feminist movement. With Mark S. Golub. Saturday - 6pm

In The News: UNRWA & Right of Return

Adi Schwartz, former editor for Ha’aretz, researcher and academic, discusses UNRWA and the Palestinian claim of a “right of return,” which he addresses in his book co-authored with Einat Wilf, “The War Of Return.” “In The News” with Shahar Azani. Sunday - 11:30pm; Monday - 3:30am, 8:30am & 12:30pm

From the Aleph-Bet: Lesson 18

Recognize Hebrew letters that tend to look alike in a complete review of all the Hebrew letters and vowel sounds. Monday - 9am & 4:30pm; Wednesday - 7pm; Saturday - 11am

A daughter tells the controversial choices that her father, Eddie Vitch, a talented caricature and mime artist from Poland, made in order to survive the Holocaust. Sunday - 9pm & Midnight; Friday - 9pm

A musical tribute to one of the 20th Century’s great cantors, Naftali Hershtik, featuring many outstanding cantors of today and a closing duet sung by Naftali and his cantor son, Netanel. From the Hampton Synagogue in Westhampton Beach, New York.
Monday – 7:30pm & 1am; Wednesday - 1:30pm; Saturday – 10:30pm & 2:30am

A discussion of “Anti-Israel vs Antisemitism” with Brian Cohen (Columbia/Barnard Hillel), Susan Heller Pinto (ADL) and Yair Rosenberg (Tablet). With Shaya Lerner (ADL) from the 2019 ADL Summit “Never Is Now” at the Javits Center in NYC.
Tuesday - 8pm & 1am; Thursday - 2pm; Saturday - 8pm

Washington's Letter To The Jews

Professor Jerome Chanes of CUNY discusses how the American Presidential administrations of the 20th Century each interacted with the state of Israel. JBS exclusive coverage of Limmud NY 2016.
Sunday - 7pm; Monday - 2pm

Bernard-Henri Lévy, one of the West’s leading intellectuals, discusses the changing role of America on the global political scene with historian Simon Schama, author of The Empire & the Five Kings: America's Abdication and the Fate of the World. Today (Sunday) – 8pm & 2am; Monday - 10pm & 4am; Wednesday - 10:30am; Friday – 8:30pm & 1am; Saturday - 3pm

The CEO of “Im Tirtzu,” Matan Peleg, and Board Chair Douglas Altabef, discuss their organization’s work as the leading Israeli organization seeking to educate Israelis influenced by the BDS Movement to doubt the legitimacy of Israel. Tuesday - 9pm & Midnight; Wednesday - 3pm

Scott Shay, author of “In Good Faith – Questioning Religion and Atheism,” explains how his book encourages atheists to consider intelligent and powerful reasons to doubt their certainty and to be open to the reality of God. L’Chayim with Mark S. Golub. Wednesday - 9pm & Midnight; Thursday - 3pm

Film critic and author Rabbi Herbert Cohen, who co-hosts a “Siskel and Ebert” type of film review show from Israel called "Kosher Movies," discusses his favorite films and their connections to values of the Jewish Tradition. L'Chayim with Mark S. Golub.
Saturday - 6pm

In The News: Olmert & Abbas

Haviv Rettig Gur, Political Analyst for The Times Of Israel, discusses Israeli reaction to the Trump Administration Peace Plan and to Ehud Olmert’s joining in a press conference with PA President Mahmoud Abbas criticizing the plan. With Mark S. Golub. Sunday - 11:30pm; Monday - 3:30am, 8:30am & 12:30pm 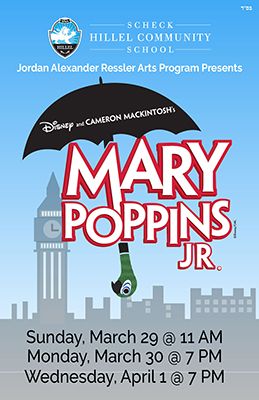 BOX OFFICE:
Purchase tickets at eHillel.org/boxoffice
($13/ticket online or $15/ticket at the door) “Sharon has uniquely contributed to Temple Judea’s advancement since she joined us in 2007. In addition to important qualities such as trustworthiness and integrity, she has a strong understanding of how Jewish communal organizations function,” said Rabbi Judith Siegal of Temple Judea. “Sharon is extremely dedicated and passionate and has the necessary business acumen, operations, management, financial and fund raising expertise to lead Temple Judea into the next decade.”

Over the last 14 years, Sharon has held numerous positions at Temple Judea, most recently as Director of Engagement & Outreach. Her expertise includes community outreach, volunteer management, public speaking and fund raising. Sharon has invaluable campus-wide knowledge along with an understanding about Temple Judea as a congregation. She previously served as Temple Judea’s Youth Director and Program Coordinator. Sharon holds a Liberal Arts & Science degree from the University of Central Florida. She lives in Miami with her husband Jeffrey and their three children.

Now celebrating 72 years of Jewish Learning and Living in Coral Gables, Temple Judea is one of the largest Reform synagogues in Miami with approximately 650 member families. Temple Judea's mission is to enrich member’s ever-more complicated lives with the new insights of ancient Jewish heritage. For more information, visit www.JudeaGables.org.

The Greater Miami Section of the National Council of Jewish Women, locally known as NCJW Miami, hired Amy Bloom, who is its first Executive Director in a decade. NCJW Miami has been making a difference in the lives of women, children, and families in Miami and South Florida since its inception in 1921. Now, it is reorganizing to more readily meet the needs of the community and its members, with a diverse and enigmatic new board and an Executive Director at the helm.

NCJW Miami Board Co-President, Jenni Person responds to its new direction, “Coupled with the redevelopment of a new, dynamic Board, the appointment of an Executive Director marks an exciting moment of infrastructure expansion for NCJW Miami. Our section can now take on our justice-centered work and mission with the impact of a solid organization while modeling the priority of professionalizing and elevating women’s roles that have historically been volunteer and undervalued as such.”

Amy Bloom brings a wealth of non-profit experience. Previously, Amy established herself as a leader in the LGBTQ community in her native Chicago as co-chair of the Human Rights Campaign’s Chicago Gala and Executive Director for Equality Illinois. She also successfully managed her own company, supporting the fundraising and marketing efforts of over a dozen organizations. Moving to Miami six years ago, Amy most recently served as NCJW Miami’s Director of Outreach & Engagement. In this role, she led the organization’s governance transition from a presidium to a twenty-six member Board of Directors. Amy brings to NCJW Miami her expertise in strategic planning, grassroots organizing, and building coalitions that drive a wider movement.

Caren Kamlet, Board Co-President adds, “It has been my pleasure to volunteer for this amazing organization. As part of the fabric of Miami’s social justice history, NCJW has been helping those in need for almost 100 years. It’s the relationship between the community and the organization that has kept us strong. Our community service and advocacy efforts have uplifted lives across race, gender, culture and spirituality.”

Amy Bloom has her eyes set on the future, "I am honored to be NCJW Miami's Executive Director, and to have the opportunity to work with and build powerful women leaders who want to bring the organization into its second centennial."