From beloved New York Times bestselling author and award-winning journalist Anita Diamant comes a timely collection of essays to help inspire period positive activism around the globe. With a foreword by Melissa Berton, Founder of The Pad Project, and a producer of the Oscar winning documentary that inspired the book, Period. End of Sentence. is an essential read for anyone interested in empowering women, girls and others around the world.

Join National Women’s Philanthropy for a special edition of Our Shared Shelf, featuring Anita and Melissa in conversation with Jessica Zachs, founder and chairwoman of Dignity Grows, a nonprofit which provides menstrual and comprehensive hygiene products to women and girls in need. It was sparked by the Period. End of Sentence. documentary and created in partnership with the Jewish Federation of Greater Hartford.

Join us online for a discussion even if you don’t have time to read the book or watch the film...we want to see you on Zoom! All female philanthropists can join this event. No fee to participate. Submit questions ahead of time here.

Order the book on Amazon here. Watch the film on Netflix or Youtube.

This free event hosted by the JWorks Miami team will help you brush up on your interviewing skills so you can strategically prepare for your upcoming interviews.

These are some of the topics we will cover:

Preparing for the interview

What not to say

Good questions to ask the interviewer

Following up and Thank You notes

We hope you can attend! The workshop will begin promptly at 10:30 am. Business casual attire is recommended.

The Zoom link will be sent to you on June 23rd.

Please RSVP at www.jworksmiami.org under the Events tab - for security purposes your RSVP is required!

This is a great opportunity to network, brush up on your job search skills, and for JWorks Miami staff to get to know you! Please note, we are unable to refer you to available opportunities unless we have met you in person or virtually. 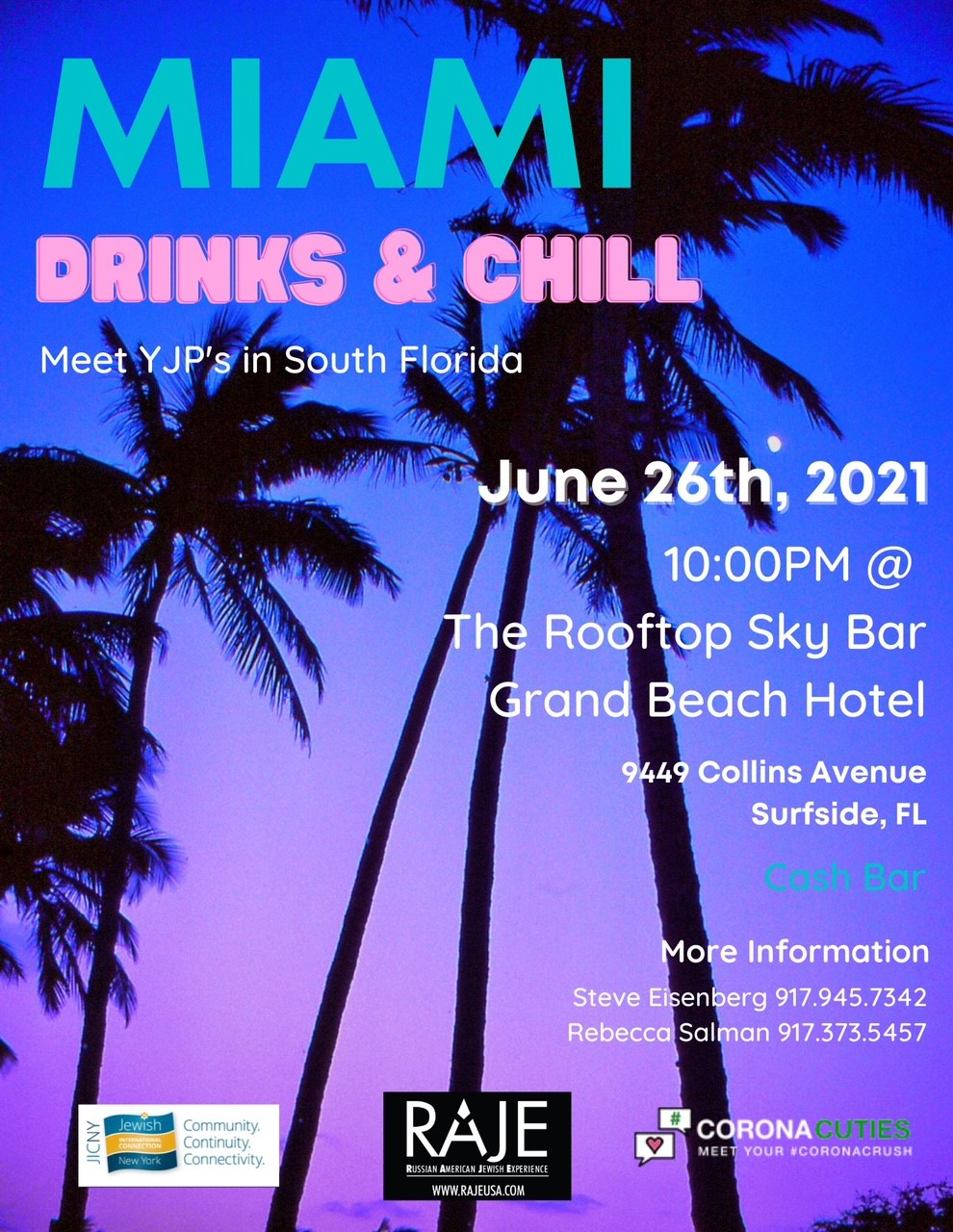 American leaders pay tribute to the ADL’s National Director Emeritus Abe Foxman, a leading voice on the subject of antisemitism who has helped shape the U.S. into a wondrous diaspora home for the Jewish people. Monday - 7:30pm & 2:30am; Tuesday - 10:30pm & 2:00am; Wednesday - 1:30pm; Thursday - 5:30am

ADL Day of Action Against Antisemitism

ADL and many other major American Jewish organizations join together in convening government officials, Jewish community leaders, civil rights organizations and others to raise awareness and demand action against the surge in antisemitism in the U.S. and around the world. Monday - 8:00pm & 1:00am; Wednesday - 2:00pm; Saturday - 7:00pm & 4:00am

LT. Col. Yochai Guiski (IDF, Ret.) examines the wider implications of the latest chapter in the decades long conflict between Israel and its enemies, especially vis-à-vis Hezbollah in Lebanon. A program of the MirYam Institute, with Benjamin Anthony. Tuesday - 8:00pm & 1:00am; Thursday - 2:00pm; Saturday - 8:00pm; Sunday June 20 - 2:00am

Sunday: Danny Ayalon - Six-Day War Former Israeli U.S. Ambassador Danny Ayalon recalls what It was like to be a young boy in the harrowing days preceding the Six-Day War of 1967 and the euphoria that followed; and discusses the war’s impact on Israel today. Sunday - 12 Noon & 6:00pm; Monday - 3:00pm

Film producer Avi Goldwasser describes how he became committed to fighting anti-Israel BDS forces on college campuses and how he came to create the film "Hate Spaces - The Politics Of Intolerance On Campus." Monday - 9:00pm & 12 Midnight; Tuesday - 3:00pm

Tyler Gregory discusses his work as executive director of A Wider Bridge, a North American organization working to create equality in Israel by expanding LGBTQ inclusion in Israel, and equality for all Israelis.
Wednesday - 9:00pm & Midnight; Thursday - 3:00pm

Harriet Schleifer, Chair of the AJC’s Board of Governors at the time of filming (and now President), discusses the key challenges facing American Jewish life including the lack of education in the Jewish community and the lack of engagement of Jewish youth. Thursday - 9:00pm & Midnight; Friday - 3:00pm

Comedian & writer H. Alan Scott discusses his personal journey that led him from his Mormon upbringing to a gay Jewish convert; and explains why he always felt he was “Jewish.” Saturday - 6:00pm

Talmud Study: Responsibility to Others

Talmud Study: Does the End Justify the Means?

From The Aleph Bet: Lesson 23

The radical Jewish notion that God is "unseen," and how one can never "prove" that God is real, are two themes addressed on this episode of "Jewish 101" (which also reviews the story of the Golden Calf). Wednesday - 9:00am & 4:30pm; Friday - 1:00pm

Orthodox: Hampton Synagogue With Hebrew, Transliteration And English Subtitles 11:00am and 2:30pm

Take a look at the steps below to see how you can get involved.

A Candle Lighting Campaign for Oneness

In accordance with Jewish tradition, candles are lit 18 minutes before sunset on Friday night.

In a time of increasing darkness, invite in The Light of HaShem (a Hebrew word for God, meaning The Name).

Join the Jewish community in these traditions to honor and amplify the light within us all and invite peace into the world.

Bring Light into the World

Candles on Friday night mark the beginning of Shabbat/Sabbath - a time to disconnect from the outer world and tune into the light within us. Together, let’s light candles and meditate on the flickering flame with ONE prayer to bring more light into the world.

After lighting the candles, we’ll sing a song of peace, Shalom Aleichem – May Peace Be Upon You.

Share blessings of lights and peace, and acts of goodness with your loved ones and community.

“When they go low, we go Hashem” - @lizzysavestsky

Event is both in person & on Zoom

RSVP FOR ADDRESS OR TO SPONSOR: seisenberg93@gmail.com 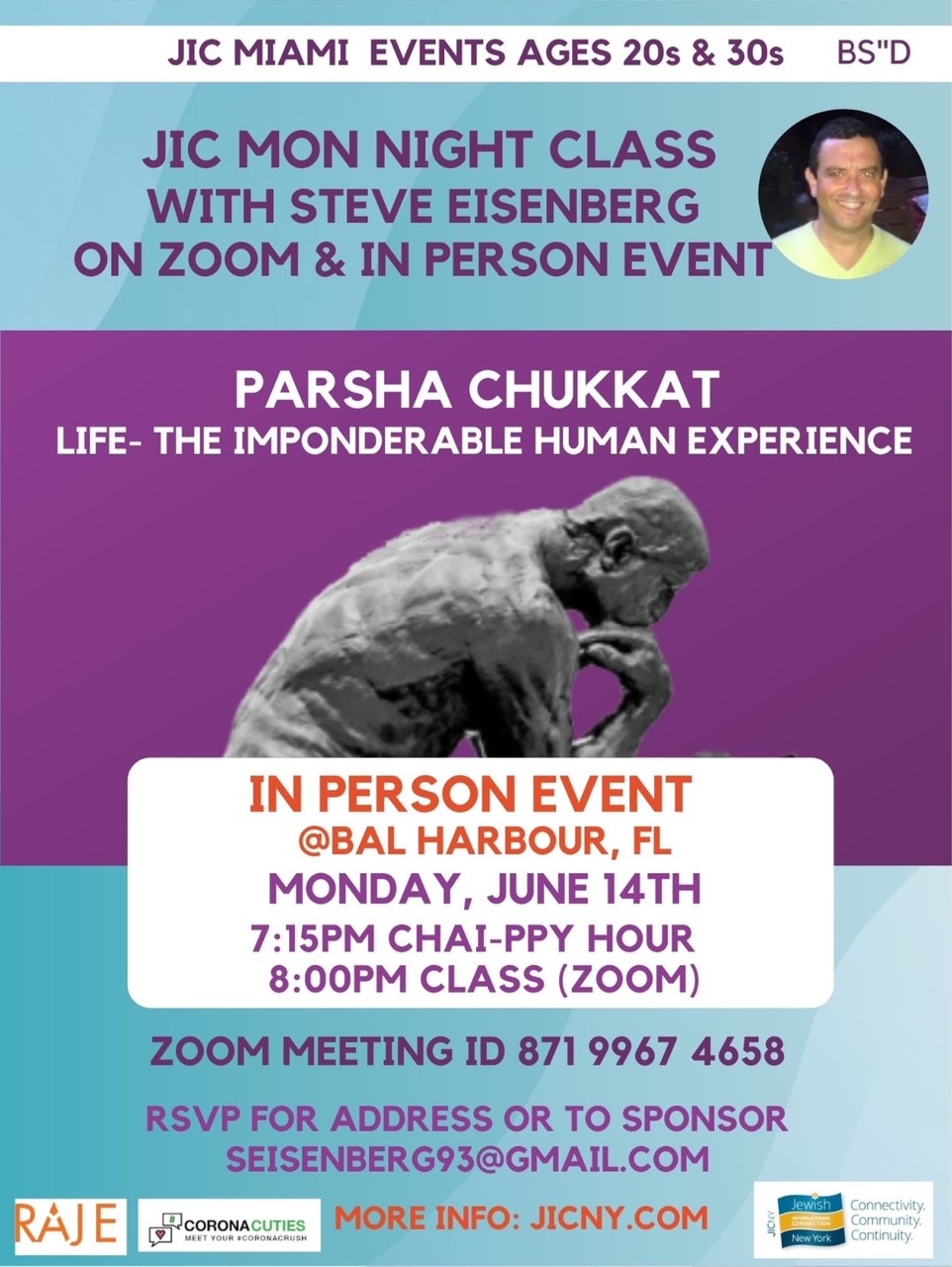 What do JIC, RAJE, and Corona Cuties have in common?? They know how to throw an awesome Shabbat Dinner!

Join us on Friday, June 25th for a delicious and beautiful Shabbat Dinner celebrating our community in South Florida.

Limited spots are available! Our last event sold out in a few days, don't be left out!

The exact location will be sent the night before the dinner for security purposes. It will be in the Bal Harbour area of Miami. 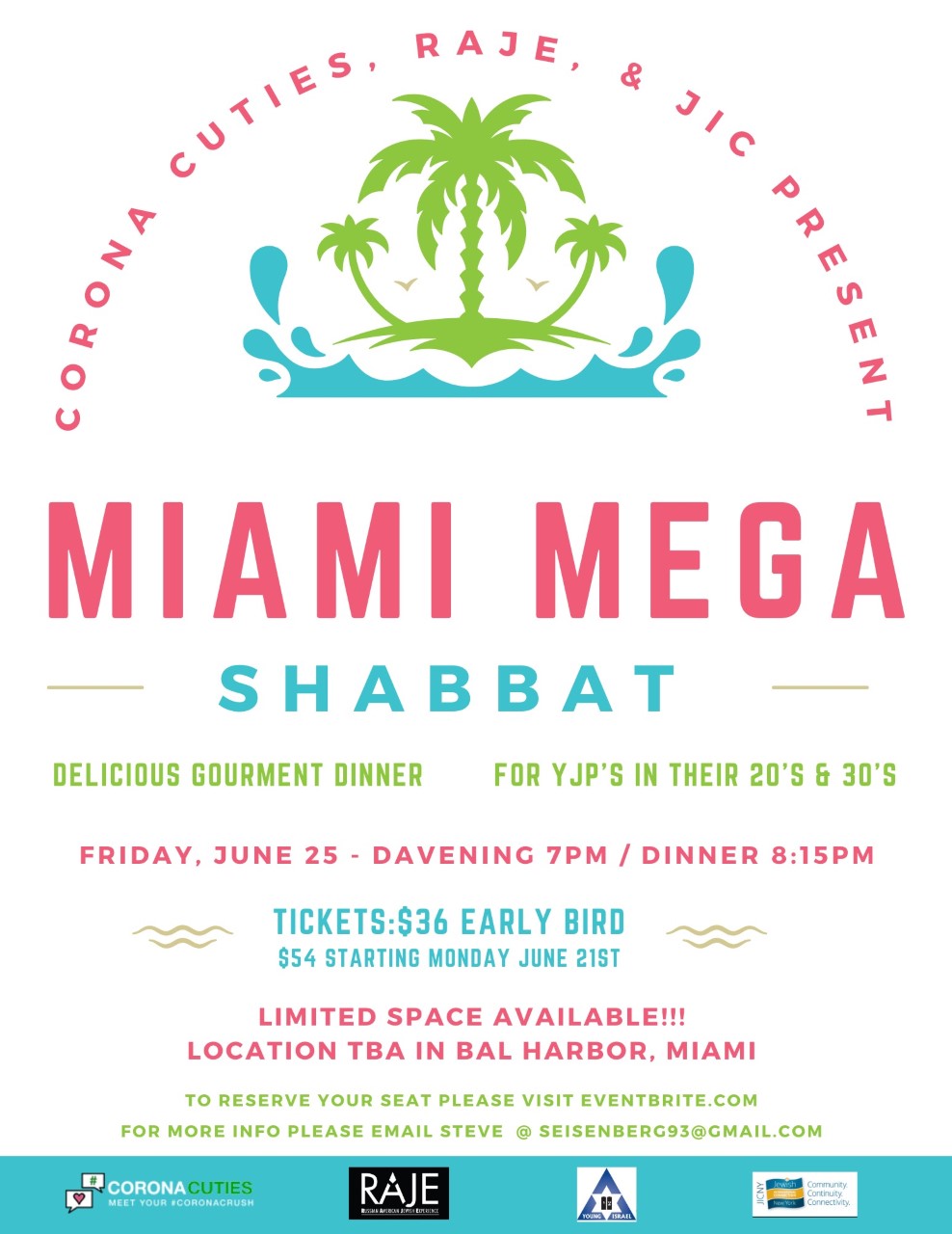 First come, first served while supplies last Please do not arrive before 9 a.m.

Addressing his congregation during the tragic week in Israel, Senior Rabbi of NYC’s Stephen Wise Free Synagogue Ammiel Hirsch pledges to seek peace, pursue reconciliation, and stand by the Jewish State not uncritically but unconditionally. Monday - 7:30pm & 2:30am; Wednesday - 1:30pm; Thursday - 5:30am; Sunday June 13 - 1:30am

Discover the incredible things happening at Ben-Gurion University of the Negev, and celebrate as sex expert and media personality Dr Ruth receives an honorary doctorate from the Israeli institution. With emcee, Israeli actress and author Noa Tishby. Monday - 8:00pm & 1:00am; Wednesday - 2:00pm; Saturday - 7:00pm & 4:00am

Explore the history surrounding The Begin Doctrine, which established that no country with the declared aim of destroying Israel would be permitted to acquire the means to do so. With Herzl Makov and Yaakov Katz. Tuesday - 8:00pm & 2:00am; Thursday - 2:00pm; Sunday June 13 - 2:00am

Shira Haas, award-winning Israeli actress and star of “Shtisel” and “Unorthodox” is joined by writer-director Ruthy Pribar to discuss “ASIA,” their new film that tells the universal and timeless story of maternal love and loss. With Eric Goldman. Thursday - 8:30pm; Friday - 2:30am & 9:00am; Saturday - 10:30pm

As Israel fights the bias at the UN Human Rights Council, it does so much more to benefit the world. Meirav Eilon Shahar, Israel's Ambassador to the UN in Geneva, shares her view & the important work Israel does on the global stage. Monday - 6:30pm & 11:30pm; Tuesday - 3:30am, 8:30am & 12:30pm

Jewish activist Howard Teich discusses the work he does for both American and Jewish organizations, and how his Brooklyn, Bronx and Manhattan Jewish Historical Initiatives are helping to preserve Jewish culture.
Today (Sunday) - 12 Noon & 6:00pm; Monday - 3:00pm

For the anniversary of the Six Day War of 1976, Yossi Klein Halevi, author of “Like Dreamers,” discusses the history, impact and implications of Israel’s dramatic military victory that changed the map and Jewish self-identity. Monday - 9:00pm & 12 Midnight; Tuesday - 3:00pm

One of Israel’s most creative career diplomats, Yossi Beilin (the architect of the Oslo Peace Process and Accords), discusses his participation in the Six Day War and the Yom Kippur War; and explains the rise and fall of Oslo.
Tuesday - 9:00pm & 12 Midnight; Wednesday - 3:00pm

Former Israeli U.S. Ambassador Danny Ayalon recalls what It was like to be a young boy in the harrowing days preceding the Six-Day War of 1967 and the euphoria that followed; and discusses the war’s impact on Israel today. L’Chayim With Mark S. Golub. Wednesday - 9:00pm & Midnight; Thursday - 3:00pm

Miriam Peretz, author of “Miriam’s Song,” describes her experience as a mother who lost two sons in the war with Palestinians while each was serving in the IDF’s elite Golani Brigade – and how she has transcended her sorrow. Thursday - 9:00pm & Midnight; Friday - 3:00pm

Amri Shlomian, founder of Ein Bustan, a school in the Galilee where Jewish and Arab Israeli children study together, describes his own Jewishness as the child of a father who is a Survivor, and the philosophy behind his school.
Saturday - 6:00pm

From The Aleph Bet: Lesson 22

In a continuing study of what it means to say that "the Torah is written by God," a discussion of the famous Talmudic story which teaches that Jews do not listen to voices from heaven to understand the Torah. Wednesday - 9:00am & 4:30pm; Friday - 1:00pm

Historian, writer, and film documentarian, Simon Schama, talks with novelist Jonathan Safran Foer about Schama's 5-part television series on 3,000 years of Jewish history and impact on civilization, The Story of the Jews. From the 92nd Street Y in NYC. The 92nd Street Y in NYC boasts an outstanding array of entertainers, thinkers, and leaders, and is a "must stop" for the biggest names in Jewish life today.
Sunday - 8:00pm & 2:00am; Monday - 10:00pm; Tuesday - 4:00am; Wednesday - 10:30am; Saturday - 1:00am & 4:00pm

If you are between the ages of 27-32, join Federation and Israel Outdoors for a free Birthright Israel experience!

Tap into the sights, sounds and energy of the country on an active and open-minded journey.