Chaplains from Mishkan Miami - The Jewish Connection for Spiritual Support, a program of the Greater Miami Jewish Federation, have created and compiled prayers, poetry and reflections to help us face life in the time of COVID-19. Click here to access them.

From babies to adults, click here for the resources the Galbut Family Miami Beach JCC Simkins on the Family Campus has posted to enjoy the water.

Keep up with your fitness routine in the comfort of your own home by clicking here for more than 100 workouts. There is something here for everyone, from high intensity interval training designed to improve strength and fitness fast, dance fitness workouts, a martial arts inspired program, a postpartum series and workouts for kids.

Coronavirus has changed how we work and live. We are all missing the camaraderie of our workplace, the zen of our favorite yoga class or the endorphins of our CrossFit group. Explore our list of resources that will help you be fulfilled and enjoy activities in new and different ways.

Keep up with your fitness routine in the comfort of your own home by clicking here for more than 100 workouts. There is something here for everyone, from high intensity interval training designed to improve strength and fitness fast, dance fitness workouts, a martial arts inspired program, a postpartum series and workouts for kids.

From babies to adults, click here for the resources the Galbut Family Miami Beach JCC Simkins on the Family Campus has posted to enjoy the water.

Be active, tone your body and feel great with these at-home workouts. Fitness instructors from the Galbut Family Miami Beach JCC Simkins on the Family Campus have posted virtual workouts here to maintain a fitness routine during these extraordinary times.

Natan Sharansky, former Chairman of the Executive of The Jewish Agency for Israel, a freedom fighter and Zionist who was imprisoned in isolation for many years by the Soviets, shares some advice here for people who are in quarantine and to help us all deal with the coronavirus crisis.

Keep Calm and Swim On

The Dave and Mary Alper Jewish Community Center has posted ways for all ages to enjoy the water. From babies to adults, here are resources to have fun in the water.

Commit to be Fit

Whether you are interested in a light workout or intense action, the Michael-Ann Russell JCC has fitness classes for all levels. You can work out with the expert MAR-JCC fitness staff with their livestreamed classes on the MAR-JCC fitness Facebook page. The schedule is updated on a regular basis.

Telemedicine During the Coronavirus Crisis

Visit a doctor and receive medical advice from your living room

Chaplains from Mishkan Miami - The Jewish Connection for Spiritual Support, a program of the Greater Miami Jewish Federation, have created and compiled prayers, poetry and reflections to help us face life in the time of COVID-19. Click here to access them.

The Blue Dove Foundation addresses the issues of mental illness and substance abuse in the Jewish community and beyond. For an array of articles, information and resources about physical and mental health,click here.

If you can’t go to the training room, bring the training to you! That’s the approach of Jewish Sports Now, a website providing elite skills and fitness instruction for amateur Jewish athletes during the Coronavirus pandemic. The site offers free access to a library of training videos for baseball, basketball, lacrosse, soccer, tennis and general fitness, assembled by leading professional coaches across the Jewish sports and fitness world. Visit here to register.

Join PJ Library, the Network and the Jewish Volunteer Center as we model kindness and teach gratitude.

During these difficult times, it is more important than ever to appreciate all our blessings – both large and small. To help, our Jewish tradition teaches us about the concept of hakarat hatov, which translates to “recognizing the good” all around us. Practicing this Jewish value helps children (and us grownups!) remember to be thankful for our lives.

This month, through the “13th Annual Season of Giving: Reimagined”, we invite all families to help others and use these experiences to engage your children in the practice of gratitude.

As PJ Library families, we are grateful for all we have and have made a special commitment to support our Community Toy Drive.

Please join us in making this holiday season special for less-advantaged kids by purchasing toys. Confirm your participation here (https://jewishmiami.org/resources/community_directory/events/rsvp/network_jvc_toy_drive_w_pj_library_rsvp/) and you’ll receive both a link to our Amazon Wish List and a special “PJ Library Gratitude Fun Guide” which will help you teach your kids about gratitude and instill a lasting practice of hakarat hatov in your home.

Thank you for joining us and helping to make this holiday season special for all!

At Chanukah, we celebrate how light – in all its forms – can triumph over any darkness. Creating this light in every moment and every interaction is a choice. Whether it’s a meal for someone hungry, support for a friend in crisis or simply a smile and kind word for someone in need, making light is what it’s about.

On December 13 at 3:00 pm, we will make all kinds of light as we enjoy a Chanukah story time, create our very own Dreidel Suncatchers and build delicious Marshmallow Menorahs!

Experience the beauty of Chanukah, from the comfort of your own home, Join us because together, we shine so bright!!

Live in Tel Aviv while developing your professional future.

Work in your area of interest according to your skills.

Build your resume through a highly subsidized eight-week internship.

Onward Israel is intended for Jewish undergraduate students between the ages of 19-27.

Miami's Onward Israel summer internship in Tel Aviv is operated through a partnership between the Beacon and Shapira Foundations and other leading philanthropists, The Jewish Agency for Israel, Masa Israel Journey, and the Greater Miami Jewish Federation. Trip organizer: Tlalim. Daniel Gordis, Senior VP at Shalem College in Israel, explains the reasons he still believes in the Two-State Solution and discusses why some American Jews have grown distant from Israel. With Laura Shaw Frank by AJC Advocacy Anywhere (2020). Monday - 8:00pm & 1:00am; Wednesday - 2:00pm; Saturday - 7pm

Author Meryl Ain reads excerpts from her novel “The Takeaway Men” and discusses themes of the book. For Jewish Book Month, an Author Series by the Hampton Synagogue of Westhampton Beach, NY with Rabbi Avraham Bronstein. Wednesday - 7:00pm & 4:00am; Saturday - 10:30pm & 1:30am

Prof. Ron Robin, Pres of Haifa University, discusses with Tammy Ben-Haim (Israeli Embassy in DC) diverse ethnic and socio-economic backgrounds of its 1,800 students and its “Multiversity.” By American Friends of University of Haifa and Israeli Embassy. Wednesday - 8pm & 1:30am; Friday - 2pm; Saturday - 8pm & 2:00am

Itamar Marcus of "Palestinian Media Watch," which monitors what Palestinians say in Arabic on PA Television and the PA website, speaks to whether there is a "moderate" Palestinian leadership with which Israel can make peace.
Sunday - 12 Noon; Sunday - 6:00pm; Monday - 3:00pm

The founders of an organization dedicated to replacing the Two-State Solution with the “New State Solution,” Benjamin Anthony (Our Soldiers Speak) and Brig. Gen (R) Amir Avivi, explain their plan and why Palestinians will accept it.
Monday - 9:00pm & 12 Midnight; Tuesday - 3:00pm

In part two of a discussion exploring the idea of a Palestinian state in the Gaza Strip extending into the Egyptian Sinai, Benjamin Anthony and Brig. Gen (R) Amir Avivi continue to explain and defend their “New State Solution.”
Tuesday – 9:00pm & 2:00am; Wednesday – 3:00pm

Rabbi David Wolpe is author of a book on King David, and Senior Rabbi of the Sinai Temple in Los Angeles.
Thursday - 9:00pm & Midnight; Friday - 3:00pm

Talia Carner, author of four books, describes her Israeli family history that goes back seven generations, her response to anyone who questions Israel's legitimacy, and how her latest novel, "Hotel Moscow," is based on her own trip to Russia in 1993. Saturday - 6:00pm & 12 Midnight

One of the Jewish communities leading philanthropists and co-founder of Birthright Israel, Charles Bronfman, discusses his life with Rabbi Peter Rubenstein, Director of Jewish Community and Bronfman Center for Jewish Life at the 92nd Street Y. Sunday – 8:30pm; Monday - 10pm; Tuesday - 4am; Wednesday - 10:30am; Friday - 8pm;Saturday - 1:30am & 4pm

How the Talmud requires that honesty be tempered with love is explained by Rabbi Mordechai Becher in a lesson entitled, "Brutal Honesty, Loving Lies" (based on Yevamot 65b) on JBS's original series "Dimensions of the Daf." Sunday Tuesday - 9:00am & 4:30pm; Thursday - 7:00pm; Friday - 2:00am

Rabbi Mordechai Becher explores the different ways the Talmud views the first two kings of Israel, King Saul and King David, based on passages from the Biblical Book or Samuel. JBS original series, “Dimensions of the Daf.” Sunday - 9:30am; Tuesday - 9:30am & 5:00pm; Thursday - 7:30pm; Friday - 2:30am

The rabbinic explanation for why Adam and Eve were sent from the Garden of Eden (and why Judaism does not view it as the fall of man), and whom Adam and Eve actually look like. Wednesday - 9am & 4:30pm; Friday - 1:00pm

In The News: Tobin on Jewish Vote

Conservative journalist Jonathan Tobin, Editor in Chief of JNS (Jewish News Syndicate), analyzes the increase in the Jewish vote for Donald Trump and discusses the fracture of the Jewish community fueled by a hatred for Trump. With Mark S. Golub.
Sunday - 5:30pm & 11:30pm (2:30pm; Monday - 3:30am, 8:30am & 12:30pm

The story of how, after Jews were exiled from their land, they were sustained in the Diaspora by Torah -- that has enabled the Jewish People to survive over the centuries. “The Jewish Story Explained,” a series from OpenDor Media hosted by Rivka Deray. Monday - 7:15pm & 2:00am; Wednesday - 1:15pm 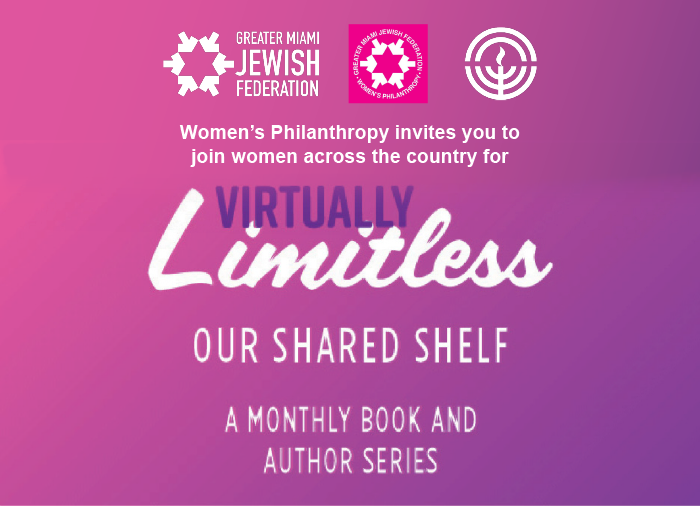 BEYOND THE GHETTO GATES: A NOVEL
BY MICHELLE CAMERON

Curl up with a good book and then join us online for a discussion with the author. Even if you don’t have time to read the book first...we want to see you online!

Give Miami Day is almost here! This year, you can begin participating early starting on Monday, November 16 through Give Miami Day on Thursday November, 19.

Diller Teen Fellows Kick Off The Year With Meaningful Programs

Volunteers Give Back With Everything But the Turkey