Monthly class for boys pre & post Bar Mitzvah (11-13) on what it means to be a Bar Mitzvah! Parents are encouraged to join! Although we will follow a curriculum, the class will be open and welcome to questions throughout. We will discuss lot's of basic Judaism and this is a great and meaningful way to bond with your child. The class is open to all, (weather they are studying for Bar Mitzvah at Chabad or elsewhere) and there is no charge. More info at (305) 770-1919 or ChabadChayil.org/4159264

Join NCJW Miami each month to celebrate, study and explore Jewish Women's issues and social justice action, led by one of our community's female clergy.

Our December program will be led by Rabbi Amy Morrison of Temple Beth Sholom. It will take place at the home of Vanessa Ressler in Miami Beach.

Address provided upon RSVP at: https://www.ncjwmiami.org/rosh-chodesh

There is no charge to attend, and you do not need to be of the Jewish Faith - all are welcome. Space is limited - RSVP required to attend.

Please bring your own lunch. We will provide beverages.

Monday, May 6 Led by Rabbi Judith Siegal at Temple Judea

NCJW Miami-Nothing Without Us: The Women Who Will End AIDS

NCJW Miami Advocacy Film Series: Once a month, we will host a film screening on issues related to NCJW’s mission of improving the quality of life for women, children, and families and safeguarding individual rights and freedoms.

Come join us for popcorn and drinks, inspiration and discussion. This month's film: Nothing Without Us: The Women Who Will End AIDS

Aqua Foundation for Women is the partner organization for this film.

To mark the 30th anniversary of World AIDS Day, we are screening NOTHING WITHOUT US. This film tells the inspiring story of the vital role that women have played - and continue to play - in the global fight against HIV/AIDS. World AIDS Day takes place on December 1st each year. It’s an opportunity for people worldwide to unite in the fight against HIV, to show support for people living with HIV, and to commemorate those who have died from an AIDS-related illness.

For the up-to-date schedule, go to jbstv.org

Comedienne and impressionist Marilyn Michaels, and Alan Dershowitz as you've never seen him before (reminiscing about his youth in the Catskills and singing "Hello Muddah, Hello Faddah") are Jake Ehrenreich's guests on the JBS Premiere of "The Jake Ehrenreich Show," with Jake's inducting Jerry Lewis into the Catskills Hall of Fame. Saturday - 8pm & 1am; Next Sunday - 10pm

JFNA Pres & CEO Jerry Silverman shares his vision of Jewish life, and Naomi Alder (CEO of Federation of Greater Philadelphia) leads a discussion on the future of Federation with Stephen Hoffman (Pres. of Jewish Federation of Cleveland), and Dr. Steven Nasatir (CEO of Chicago Jewish Federation) at the Third Plenary of the historic 2018 JFNA "General Assembly" from Tel Aviv, Israel. Monday- 8pm & 1am; Wednesday - 2pm; Saturday - 7pm & 2am

The concluding plenary of the 2018 JFNA's "General Assembly" in Tel Aviv features an address by U.S. Israeli Ambassador, David Friedman, and a conversation with the Prime Minister of Israel, Benjamin Netanyahu.
Tuesday - 7:30pm & 1am; Thursday - 1:30pm; Saturday - 1:30pm

Light the menorah, eat a latke, spin the dreidle and hey, don’t blame us if you lose all your gelt! (KIDDING, no gelt, but a lot of fun!) Beautiful festival music by Rabbi Danny Marmorstein, Cantor Steven Haas and the Ahavat Olam Choral Society during our Shabbat service on Friday, December 7, at 7:45 p.m. Located on the grounds of Killian Pines United Methodist Church, 10755 SW 112 Street in Kendall. For more information please call 305 412-4240 or email members@ahavatolam.org Chag same’ach!

Back by popular demand! The Yiddish Club is re-forming! Spread the word! Brunch will be served. No charge!

Scheck Hillel Community School invites you to an early evening Chanukah celebration for the community at large. The event will include live music and carnival games for all ages to enjoy. Visitors will also be able to get a taste of our academics by participating in our Chanukah “Hour of Code” Interactive Station, where students in Grades 2 through 5 will teach coding with a Chanukah twist.

The Menorah will be lit during the event and traditional Jewish holiday food favorites will be available for purchase.

This event is free of charge. 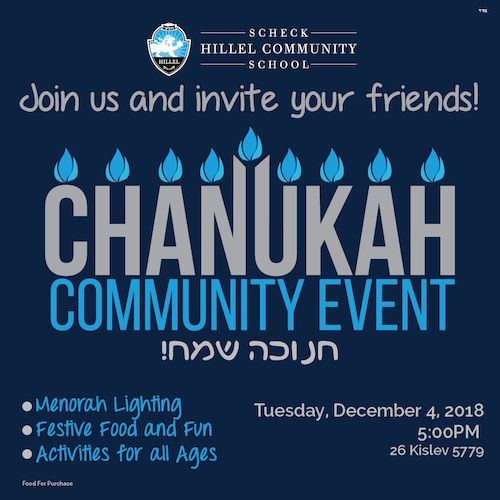