Women's Philanthropy invites you to a special program on Wednesday, May 11th from 10:30am-Noon at the Museum of Contemporary Art, 770 NE 125th St. North Miami.

Please join us for a guided private tour of the exhibit My Name is Maryan. The exhibit is a monographic presentation of four decades of paintings, sculptures, drawings & film by the iconoclastic, ground-breaking Polish-born artist Maryan. To learn about the exhibit, visit mocanomi.org.

We are honored to have Dr. Helen Sachs Chaset as our docent. Dr. Chaset is a long-time educator & daughter of two Holocaust survivors who was born in a displaced persons camp in Hannover, Germany.

We respectfully request that only those who are fully vaccinated or have a negative COVID-19 PCR test taken within 72 hours in advance of this event attend. We thank you for your understanding & cooperation.

ANTISEMITISM TODAY: A PAGE OUT OF AN AGE-OLD PLAYBOOK

ANTISEMITISM TODAY: A PAGE OUT OF AN AGE-OLD PLAYBOOK 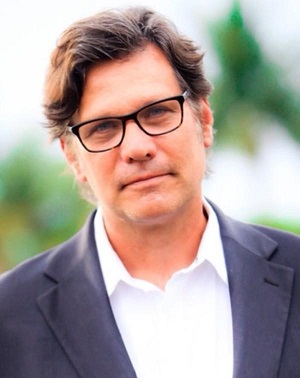 Due to the generosity of The Lynn & David Russin Family Foundation, this program is free and open to the community.

Lynn Dumas Russin treasured her Melton & More Adult Learning experience and was passionate about Jewish learning. She is fondly remembered for her vibrant personality, her dedication to family and her love of Judaism.

This program will take place virtually.

Registration is required to receive the ZOOM link. CLICK HERE TO REGISTER.

Rabbi on the Sidelines: Tamir Goodman

Former American-Israeli pro basketball player Tamir Goodman, known as the "Jewish Jordan," describes his love of the game, love of Torah, and how faith has carried him through his sports journey from Baltimore to college basketball to making Aliyah. Follow on Twitter @RabbiESherman, Instagram @rabbi_erez_sherman,and Facebook @SinaiTempleLA Sunday - 7:00pm & 2:00am Monday - 1:00pm Tuesday - 10:15am Thursday - 5:00am & 10:00pm

In a sermon delivered the day after a recent terror attack in Tel Aviv, Rabbi Hirsch reaffirms his congregation’s partisan stance on Israel, and its position to always support Israel’s right and moral obligation to defend itself against all attacks. Tuesday- 7:00pm & 2:00am Wednesday - 10:00am Friday - 11:00am Saturday - 4:00pm

JNS editor-in-chief Jonathan Tobin discusses the plague of media disinformation and hypocrisy that is eroding democracy and fueling anti-Semitism, and is then joined by Chaim Silberstein, (KeepJerusalem.org), who discusses his efforts to reclaim Jewish property in Jerusalem neighborhoods, recounts the history of the dispute, and warns against what he says could happen if Israel fails to defend its sovereignty. Thursday - 8:00pm & 1:00am Friday - 9:00am Saturday - 7pm

In The News: The Temple Mount

Dr. Eran Tzidkiyahu of The Paris institute of Political Studies & The Forum for Regional Thinking, discusses the current violence at the Temple Mount, its history, and what if anything can be done to change the pattern of escalation at the site, holy to Jews and Muslims. With Teisha Bader. Today (Sunday) - 5:30pm

In The News: Rockets Fired at Israel

Mannie Fabian, military correspondent for the Times of Israel, discusses the rockets fired at Israel from Gaza and from Lebanon in April, and hopes for maintaining calm for the conclusion of Ramadan. WIth Teisha Bader. Monday - 6:30pm & 11:30pm Tuesday - 3:30am, 8:30am & 12:30pm Saturday - 11:30pm

Micah analyzes the recent trend of Israeli security services revealing the number of thwarted terror attacks in Israel, and how this practice, meant to soothe jangled nerves, could end up doing exactly the opposite. He also highlights the fact that many foreign policy commentators are (somehow) managing to make the Russia-Ukraine war about Israel; why should Israel's publicly-stated stance on the war be so disproportionately important compared to that of other nations of the world? Wednesday - 6:30pm & 11:30pm Thursday - 3:30am, 8:30am & 12:30pm Saturday - 5:30pm

Rabbi Yehuda Sarna, (NYU Chaplain, Executive Director at the Bronfman Center, and Chief Rabbi of the Jewish Community of the Emirates), discusses his experiences with right-wing Orthodoxy, his assessment of Jewish college students today and more. Today (Sunday) - 6:00pm

Miriam Peretz, author of Miriam’s Song, describes her experience as a mother who lost two sons in the war with Palestinians while each was serving in the IDF’s elite Golani Brigade – and how she has transcended her sorrow. Tuesday - 9:00pm & Midnight Wednesday - 3:00pm

For Israel's independence day, fifth generation Sabra Rochelle Etingin recounts her experience as a young girl growing up in Israel during the birth of the Jewish State of Israel. Wednesday - 9:00pm & & Midnight Thursday - 3:00pm Saturday - 6:00pm

Hebrew: From The Aleph Bet: Lesson 17

Rabbi Mordechai Becher explores evidence of how the Jewish people have had a connection to the Land of Israel for thousands of years. Today (Sunday) - 9:00am Monday - 4:00am Tuesday - 9:00am Wednesday - 7:00pm

Federation’s holy work is made possible by the generosity and commitment of our volunteer leaders. Join us as we reflect on the challenges and accomplishments of the year, recognize leaders and elect the slate of officers for the coming year.

We look forward to honoring our Greater Miami Jewish Federation Outgoing Board Chair, Isaac K. "Ike" Fisher, and prior Board Chair, Jeffrey Scheck. We will also welcome Federation Board Chair-Elect Ariel Bentata and the officers, board of directors, trustees, and leadership council.

Additionally, the following emerging leaders will be honored for their outstanding commitment to the Federation:

Join Yodeah to Learn About Hereditary Cancers in the Jewish, Black & Caribbean Communities

Yodeah will be presenting a one hour virtual program for the Greater Miami Jewish Federation and its affiliated organizations on hereditary cancers in men and women in the Jewish, Black and Caribbean communities. Please join us for this life saving program for you and your family and find out how you can be tested. The program will include time for questions and answers. Friday, May 13 from 11:00am until 12:00pm. 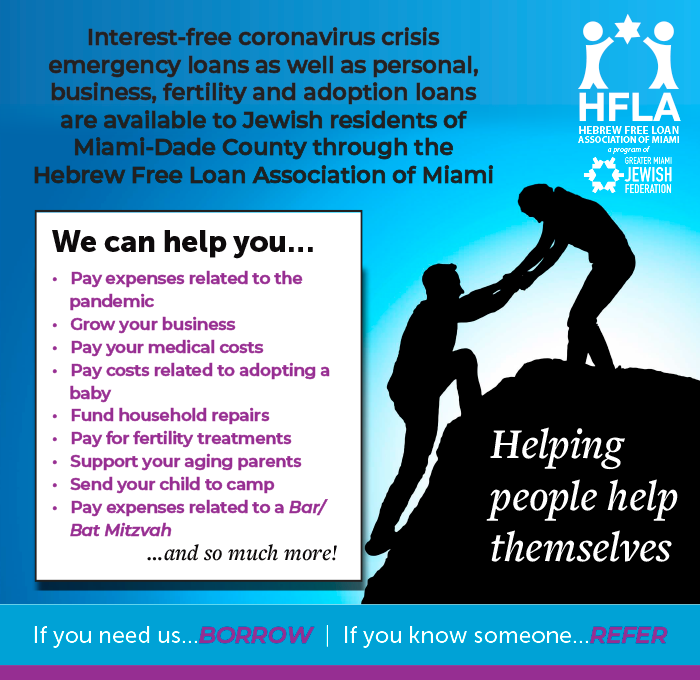 HFLA Provides Interest-free Loans for Those in Need

If you know someone ... REFER

Apply to be a Miami Diller Teen Fellow 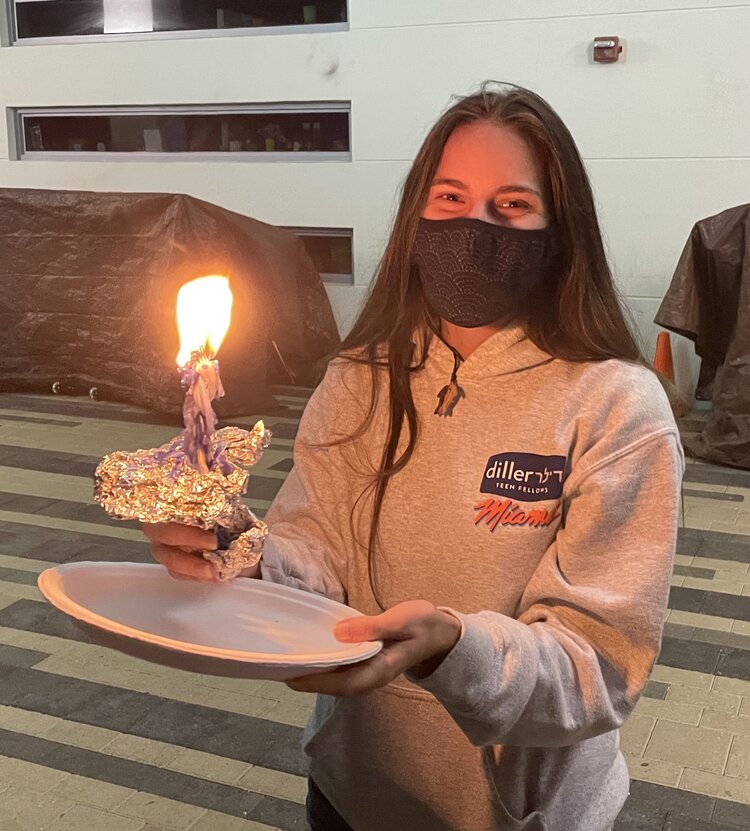 Applications are now open for Miami Diller Teen Fellows, a leadership program for Jewish 10th and 11th graders living in or attending school in Miami Dade County. Throughout the year-long Fellowship, teens develop leadership skills, connect in a global network of peers, strengthen their Jewish identities and create ripples of good throughout the world.

Diller Teen Fellows empowers teens to become leaders of tikkun olam and provides them the tools to become a force of change throughout their lifetime.

* This is an exclusive leadership cohort limited to 20 students. Apply now through May 31, 2022. Visit dillermiami for eligibility information and to learn more.* 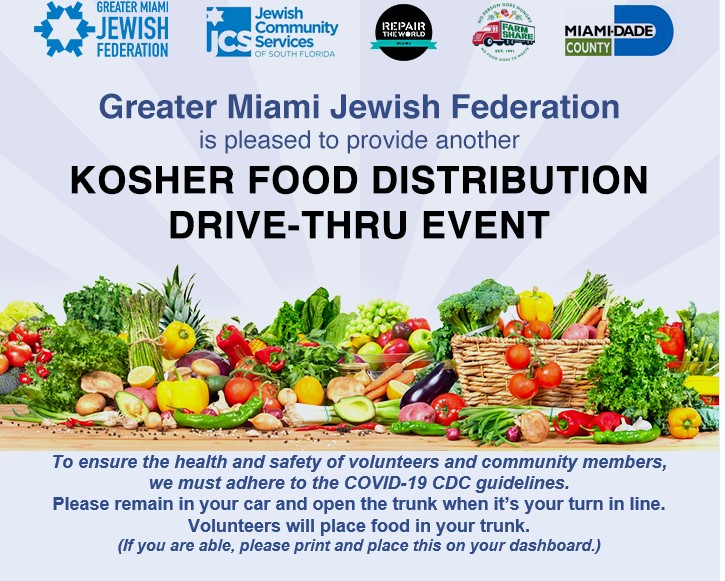 Please use entrance on Federal Highway

Four men who survived the Buchenwald concentration camp as children return to the compound for the 65th anniversary of their liberation, in this documentary that also tells the story of heroic efforts by the camp’s Communist-led underground. Sunday - 9:00pm & Midnight Monday - 9:35am Friday - 9:00pm Saturday - 4:00am

Rabbi on the Sidelines: Jeff Passan

American baseball columnist with ESPN Jeff Passan shares the inspiring stories to watch for in the 2022 season, describes what the MLB is like behind the scenes, and offers his thoughts on the spiritual importance of America's past time. Follow on Twitter @RabbiESherman, Instagram @rabbi_erez_sherman, and Facebook @SinaiTempleLA Sunday - 7:00pm & 2:00am Monday - 1:00pm Tuesday - 10:00am Thursday - 5:00am

Filmmaker Barry Levinson joins Eric Goldman to discuss The Survivor, his film based on the life of Harry Haft, an Auschwitz prisoner who learns how to box in order to survive, and who goes on to have a short boxing career that includes a fight with boxing legend Rocky Graziano after the war. Monday - 7:30pm & 2:00am Wednesday - 10:30am Thursday - 12:30pm Friday - 11:00am Saturday - 5:30am

In the Spotlight: Seder for Holocaust Memory

Rabbi Justin Pines, of the Shalom Hartman Institute of North America, joins Abigail Pogrebin to discuss a new Yom HaShoah ritual known as the Hitkansut (convergence), an experiential “Seder for Holocaust Memory” created to carry on and evolve the traditions of remembrance as fewer survivors are able to tell their stories. Monday - 8:00pm & 1:00am Tuesday - 11:00am & 10:00pm Wednesday - 2:00pm Saturday - 7:00pm

In a sermon to his congregation of the Stephen Wise Free Synagogue in New York City, Rabbi Hirsch explores the core Jewish value of Tikkun Olam (the Jewish obligation to improve the world and do good fo all humanity), and emphasizes how that value is linked to the value of Klal Yisrael (the idea that the Jewish People are a family who are responsible first and foremost one for the other). Tuesday- 7:00pm & 2:30am Wednesday - 10:00am Saturday - 4:00pm

Central Synagogue joins with Saint Peter’s Church for an interfaith Holocaust Remembrance ceremony, demonstrating that people of all faiths are committed to ending genocide and memorializing this dark chapter in history. Wednesday - 6:00pm & 10:30pm Thursday - 8:30am

Holocaust Survivors are joined by Israeli President Herzog, Prime Minister Bennett and other dignitaries for the official Israeli Yom HaShoah ceremony at Yad Vashem, Israel's memorial to the victims of the Holocaust. Thursday - 7:30pm Friday - 4:30am

**Going beyond the crisis in Ukraine, Robert Siegel asks if we’re on the verge of a new Cold War, with Ivo Daalder (Chicago Council on Global Affairs), Robin Wright (The Wilson Center), Kimberly Marten (Barnard College) and Donald Jensen (US Institute of Peace). A program of AFRMC Wednesday - 8:00pm & 1:30am
Thursday - 1:00pm

Dr. Eran Tzidkiyahu of The Paris institute of Political Studies & The Forum for Regional Thinking, discusses the current violence at the Temple Mount, its history, and what can be done to change the pattern of escalation at the site, holy to Jews and Muslims. With Teisha Bader Monday - 6:30pm & 11:30pm Tuesday - 3:30am, 8:30am & 12:30pm Saturday - 11:30pm

Nancy Spielberg describes growing up Jewish in Phoenix with her brother Steven, and discusses Who Will Write Our History, her film about a clandestine group of Warsaw Ghetto Jews who documented Nazi atrocities Today (Sunday) - 12:00 Noon Monday - 3:00pm

Cantor Joseph Malovany reflects upon the way in which Eastern European countries are seeking reconciliation after the Holocaust and describes his participation in a ceremony commemorating the 70th Anniversary of the Warsaw Ghetto Uprising. Today (Sunday) - 6:00pm

**Moshe Avital z”l Moshe Avital z”l, who survived Auschwitz and Buchenwald to become one of the “Children of Buchenwald” (a ship which ran the British blockade of Palestine), describes his journey and his fighting with the Haganah in the War of Independence Thursday - 9:00pm & Midnight

Elie Wiesel z"l For Yom HaShoah, JBS presents a special program of Elie Wiesel (z”l) from his multiple appearances on L’Chayim, in which the author of Night and Nobel Laureate shares his feelings about God, and forgiveness of the German People. Friday - 3:00pm**

For Yom HaShoah, a conversation with the late Simon Wiesenthal, the foremost Nazi hunter who explains why he was always concerned with justice not vengeance. Friday - 3:30pm

Hebrew: From The Aleph Bet: Lesson 16

Learn about exceptions to vowel pronunciation and review the entire Hebrew alphabet. Download Lessons and Worksheets free on the JBS website by Clicking Here. Monday - 9:00am & 5:00pm Thursday - 10:00am Friday - 4:00am

Talmud Study: Morality In The Shoah

Rabbi Becher reviews Talmudic examples of how one maintains moral integrity and Jewish identity in extreme circumstances. Today (Sunday) - 9:00am Monday - 4:00am Tuesday - 9:00am & 5:00pm Kulna is a nonprofit organization in Miami’s partner city of Yerucham in Israel's Negev region. The Kulna mission is to elevate Sephardic culture in Israeli society and educate younger generations about Judeo-Moroccan heritage both in Israel and in Morocco.

For more information please contact Bonnie Dawson at bdawson@gmjf.org or 786.866.8498.

If you, a family member or friend require special accommodations to attend these events, please let us know. We will do our best to assist you.

A MESSAGE FROM THE GREATER MIAMI JEWISH FEDERATION
We respectfully request that only those who are fully vaccinated or have a negative COVID-19 PCR test taken within 72 hours in advance of this event attend. We thank you for your understanding and cooperation.