JBS Highlights 5/16- 5/22: Shavuot, In The News, Jewish Roots Research, Censorship in the PA

Former Israeli Ambassador to the U.S. Michael Oren analyzes the origins, historical contexts, and current media coverage of the emergency in Israel, before rockets begin raining down near his home. A program of The Jewish Agency for Israel & JFNA. Monday - 7:00pm & 2:00am; Wednesday - 1:30pm; Thursday - 5:30am

*A panel discussion from Hadassah about the latest in genealogy technology, family-roots research, and potentially unsettling DNA discoveries, as well as the impact that genealogical research is having on people who want to discover their Jewish heritage. With authors Dani Shapiro and Libby Copeland, and genealogist and journalist Jennifer Mendelsohn, moderated by Hadassah Magazine Executive Editor Lisa Hostein. Tuesday - 8:00pm & 1:00am; Thursday - 2:00pm; Saturday - 2:00am *

Issues of censorship, corruption and a lack of democracy in the Palestinian Authority are impediments towards improving living conditions for everyday Palestinians and to necessary institution building in the territories. Award-winning producer and journalist covering Palestinian affairs for the Jerusalem Post Khaled Abu Toameh offers a first-hand perspective of these stumbling blocks that deny a better future for Palestinians and Israelis alike. A program of HonestReporting Canada with Chairman Jonas Prince. Wednesday - 8:00pm & 2:00am; Friday - 2:00pm; Saturday - 8:00pm & 1:00am

In The News: Adele Raemer

Adele Raemer, a medical clown who has lived in Kibbutz Nirit since 1974 and who experienced Hamas’ rocket barrages last week, shares what life is like on the ground in Israel during these harrowing days. "In The News" with Shahar Azani. Monday - 3:30am & 8:30am

David Chudnow describes how his father Avrum (z”l) conceived and created a national park in the Sinai Dessert and Prof. Erez Ben-Yosef (Tel Aviv U.) discuss the remarkable finds at the park’s copper mines dating back to the Iron Age.
Tuesday - 9:00pm & 2:00am; Wednesday - 3:00pm

Wednesday: The War Of Return

Israeli activist Einat Wilf & Israeli journalist Adi Schwartz discuss the Palestinian insistence on a “right of return” which a priori makes any peace agreement with Israel impossible – detailed in their book “The War Of Return.” Wednesday - 9:00pm & Midnight; Thursday - 3:00pm

Conservative Rabbi Robert Wolkoff of Congregation B’nai Tikvah of North Brunswick, NJ explains why he is sure of the existence of God, and discusses his understanding of how God impacts the world. Thursday - 9:00pm & Midnight; Friday - 3:00pm

Rabbi Raphael Shore discusses his film-based organizations, “Jerusalem U” and “The Clarion Project,” and the work he is doing to educate Jews and to expose the dangers of Islamic extremism. Saturday - 6:00pm

As the Jewish world reads “B’Shalach” from the Book of Exodus, describing the miracle of the Red Sea, Rabbi Mordechai Becher (Gateways) discusses the Talmud prohibition against reading certain Torah passages literally on JBS’s “Dimensions of the Daf.” Sunday - 9:00am; Tuesday - 9:00am & 4:30pm ; Thursday - 7:00pm; Friday - 4:00am

From The Aleph Bet: Lesson 19

A fascinating look at how various rabbinic midrash answer the question: What Really Happened At Sinai? is provided by Rabbi Mark S. Golub. Wednesday - 9:00am & 4:30pm; Friday - 1:00pm

Author and Esquire journalist AJ Jacobs (The Year Of Living Biblically) describes what it was like living a year according to Biblical Laws. A JBS exclusive presentation from the stage of the 92nd Street Y in New York City. Sunday - 2:00am; Monday - 10:00pm; Tuesday - 4:00am; Wednesday - 10:30am; Saturday - 1:00am & 4:00pm

Renowned essayist and novelist Cynthia Ozick shares her views on Jewish writers--including why she disdains the term--and discusses Jewish world themes and the modern portrayal of Israel. Recorded before a live audience at New York's 92nd Street Y. Sunday - 2:30am; Tuesday - 4:30am & 10:30am; Wednesday - 11:00am; Saturday - 1:30am & 4:30pm

Please join us at JWorks Miami free Networking and Informational Interview Skills Workshop on Thursday, May 20th, 10:30am-12:30 pm.

This is going to be a great workshop, we will be providing useful advice on how to build a network for greater success! Some of the topics to be covered include:

How to craft an impactful elevator pitch

Networking tips to expand your circle

Please RSVP at JWorks Miami event - your RSVP is required! 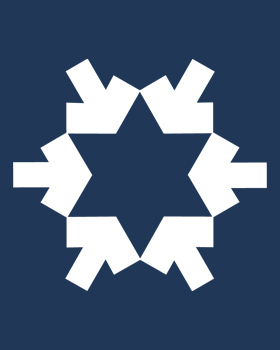 The Greater Miami Jewish Federation and its Jewish Community Relations Council (JCRC) strongly condemn the barrage of rocket fire and incendiary balloons launched from Gaza by Hamas and Islamic Jihad that began on Monday, May 10 and has continued through today.

We are deeply concerned about this major escalation of violence by these two terrorist organizations utilizing hundreds of rockets aimed at heavily populated areas in Israel causing deaths and injuries. The attacks have been widespread from small towns surrounding Jerusalem to the heart of the country in Tel Aviv and have forced millions of Israelis into safe rooms and bomb shelters causing trauma and fear. Schools are closed and everyday life has come to a standstill.

We unequivocally stand with the people of Israel and support Israel’s right to defend itself and do all that it can to stop these attacks on its civilians at once. Many members of Miami’s Jewish community have children, grandchildren, extended family and friends in harm’s way at this very moment and we join them in praying for their safety and wellbeing. We extend our prayers for a speedy recovery – refu’ah sh’leymah – to all those injured and mourn for all innocent lives lost during these senseless attacks.

Kosher Food Distribution at Greater Miami Jewish Federation on May 20

On Thursday, May 20 at 5:15 PM, we will hold Federation’s Annual Meeting to honor community leaders and elect the Officers, Board of Directors, Trustees, Leadership Council and Council of Jewish Organizations to guide and govern us for the next two years. Like last year, the Annual Meeting will be conducted via Zoom. Please see the proposed slate below, which will be presented by the Nominating Committee in their efforts to ensure the best and broadest representation of Miami’s Jewish community.Click here to RSVP for the Annual Meeting and to receive instructions on how to participate.

Join B'nai B'rith World Center-Jerusalem and the World Zionist Organization for a special live Jerusalem Day tour commemorating the reunification of Jerusalem and development of the city since the Six Day War. Led by guides Aviv Wishkovsky and Dorit Graiver, this memorable tour will educate and inspire. Monday - 7:30pm & 2:30am; Wednesday - 1:30pm; Thursday - 5:30a

In celebration of Yom Yerushalayim, a day commemorating the reunification of Jerusalem at the end of the Six-Day War of 1967, award-winning author Yossi Klein Halevi joins AJC to look back at one of the greatest victories in Jewish history. Monday - 8:00pm & 1:00am; Wednesday - 2:00pm; Saturday - 7:00pm & 4:00am

Rabbi David Rosen (AJC) moderates a discussion with ambassadors to the U.S. from Bahrain, the UAE, and the former U.S. Ambassador to the Sultanate of Oman, in a program that celebrates the newfound ties between Israel and the Gulf Arab states. Tuesday - 8:00pm & 1:00am; Thursday - 2:00pm; Saturday - 10:00pm & 2:00am

In The News: Jerusalem Day in Israel

In celebration of Jerusalem Day, JBS shines a light on the Tower of David Citadel Museum. Caroline Shapiro, Dir. of International Relations at the Museum, shares what's new, and how Jerusalem brings together past, present & future. With Shahar Azani. Monday - 6:30pm, 11:30pm; Tuesday - 3:30am, 8:30am & 12:30pm

In The News: The ZOA & Boston JCRC

In this episode of Thinking Out loud, Micah Halpern talks about the historical importance of bipartisan support for the state of Israel in the halls of Congress and how the nature and breadth of this support may be changing. Also, Russia's belligerent intentions with regards to Ukraine, and what the Biden administration can do to stand up to Putin's aggression. Wednesday - 6:30pm & 11:30pm; Thursday - 3:30am, 8:30am & 12:30pm

Ron Eliran is known internationally as "Israel's Ambassador of Song" and has been entertaining audiences since the 1960s as the Israeli army's entertainer. Monday - 9:00pm & 12 Midnight; Tuesday - 3:00pm

World War II vet Murray Greenfield, who as a young man joined the effort to smuggle Survivors through the British Blockade of Palestine, tells his dramatic story and how he endured Cyprus to build a life and Gefen Publishing. Tuesday - 9:00pm & 2:00am; Wednesday - 3:00pm

World War II Veteran and Israeli activist William Langfan reflects on his time in the war and explains the chicanery behind the Palestine National Charter resolution.
Saturday - 6:00pm

Evidence of how the Jewish people have had a connection to the Land of Israel for thousands of years.
Sunday - 9:00am

Rabbi Mordechai Becher explores the different ways the Talmud views the first two kings of Israel, King Saul and King David, based on passages from the Biblical Book or Samuel. JBS original series, “Dimensions of the Daf.”
Sunday - 10:15am; Tuesday - 9:00am & 4:30pm; Thursday - 7:00pm; Friday - 4:00am

From The Aleph Bet: Lesson 18

A dramatic telling of what it was like for the Children of Israel to stand at "Sinai" to hear the voice of God, and how the rabbis explain that each person "heard" God in his own way that day. A JBS original series with Rabbi Mark S. Golub. Wednesday - 9:00am & 4:30pm; Friday - 1:00pm 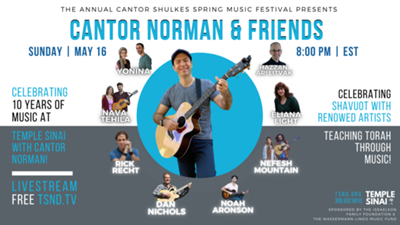 Join us as we deliciously celebrate Shavuot, where we not only mark receiving the Torah but traditionally eat dairy foods! You will learn about the art of cheese mongering from cheese connoisseur Michael Landis and sample several delicious cheeses.

May 17th 7:30 PM via zoom REGISTER AT bit.ly/alpercheese 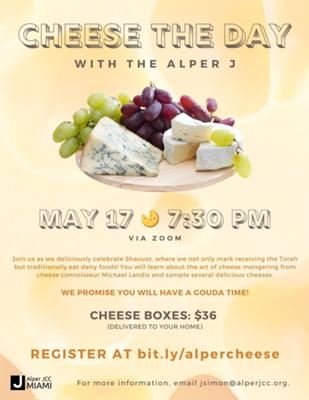 Join ADL Florida for an timely and dynamic evening on Extremism in 2021 on May 20th at 6:30 pm. The evening will feature a panel of experts on antisemitism, racism, and hate with an interactive Q & A and a conversation with bestselling author Dr. Ibram X. Kendi, a National Book Award-winning and #1 New York Times bestselling author of seven books.

Our Jewish Legacy - Writing Workshop May 13

Our Jewish Legacy - The Story Continues